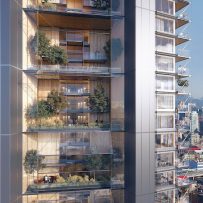 A Vancouver developer is proposing a new 35 to 40 storey tower for the Broadway corridor, but the plan isn’t for a typical high rise.

Bruce Langereis, president of Delta Land Corporation, is working with architect Peter Busby from Perkins + Will to design a mass timber building that could revolutionize the way developers build.

The tower would be mostly mass timber, likely with a concrete core. The building will use a fraction of the carbon needed to build something similar in steel.

According to Langereis, it is worth the risk because time is running out on the environment.

“We’re way out there. There’s already wood buildings, but we’re trying do a zero-emissions healthy building and a building that generates as much of its own energy [as possible],” he said.

The B.C. government recently amended the building code to allow for wood buildings up to 12 storeys, and the federal government is expected to do the same next year.

It has two concrete main pillars surrounded entirely by what’s known in the industry as “CLT” or cross-laminated timber.

Busby says technology right now will let them reach 35 or 40 storeys, but that lab tests suggest the sky is the limit with this technology.

According to engineers, using the same sort of construction techniques the Empire State Building could have been built using CLT.

There are still issues to be worked out.

Soundproofing the building is more difficult than with concrete or steel, and people associate wood with a greater risk of fire.

Architect Michael Green has become one of the leading designers to make use of wood. He says fire risk using mass timber construction is much lower than a typical wood construction using dimensional lumber like two-by-fours.

“The big game changer is, for us to live in cities as we do, we need to work with materials that are big materials, gluing together these huge panels that we call mass-timber panels that let us build these huge heights that we’re now talking about,” he added.

The building proposal for Pine and West 8th Avenue is barely off the drawing board, and will still have to go through a litany of city approvals, including height.

According to Langereis, the wait is worth it, as the building is more than just about using wood: it is about trying to make a functional space that works financially and dramatically cuts down on the energy it uses.

“We won’t have a natural gas line into the building, it will be heated with geothermal and people will use induction to cook with,” he said.

“The building will be so energy efficient people might be able to use a single candle to heat their apartment.”