Woolworth’s building to get a makeover 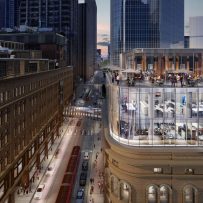 Cadillac Fairview has unveiled plans for a makeover of 2 Queen St. W., a project that will restore the former Woolworth building’s original 1885 brick façade and open a “gateway” from Yonge St. to the south entrance of the Eaton Centre.

The Toronto-based commercial property developer said the expansion and restoration project aims to enhance retail and office space — and will add three more storeys to the building, including a top floor designed to accommodate a restaurant with an outdoor terrace. It said the project will improve the quality and utility of the property “while preserving its unique architectural features.”

Overall, the redevelopment comprises 23,150 square feet of office space and 22,011 square feet of retail and storage space, along with mechanical, structural and electrical upgrades. The value of the project was not disclosed.

The façade of the building on the northwest corner of Yonge and Queen Sts. had been obscured for more than 50 years, with the exterior covered in white aluminum after several renovations. Since 1895, the site had been occupied by the old Jamieson Clothiers store but was best known as the building Woolworth’s anchored for 65 years.

“But after the five-and-dime moved out in 1980, the worn-out structure became a succession of no-name retail outlets and seemed headed for oblivion. It was one of the shabbiest downtown addresses,” Star columnist Chris Hume wrote in 1987.

“The outside was in equally bad shape. The bricks suffered serious damage in the ’40s as a result of being sandblasted. To make matters worse, all the cornices and protuberances were cut off when aluminum siding was added.”

In 1985, the building was bought by Guarantee Realty Trust and Karas Corp. which decided to develop it. The co-owners hired the Toronto architectural firm of Alter & Ireland to renovate.

The building was restored in the 1990s and replaced with the Tower Records Superstore, while more recently a sports store and gym have served as the main tenants as the site housed retail and office space.

Cadillac Fairview said the undertaking complements its continuing investment in its owned and managed Eaton Centre complex, which underwent a two-year, $120 million renovation started in 2010.

The company, controlled by the Ontario Teachers’ Pension Plan, in 2017 completed installation of a new Queen St. pedestrian bridge connecting the Eaton Centre to Hudson’s Bay. It has also partnered with BMO to develop an “urban campus” that will take over a portion of Sears Canada’s former office space at the downtown mall and house 3,500 high-tech employees when it opens in 2021.

Rory MacLeod, development vice-president, said the company “is proud to be restoring 2 Queen St. W. to its original glory. Cadillac Fairview is absolutely committed to our responsible investment in the heritage properties under our stewardship,” he added.