WOOD HIGHRISES TO SHOOT UP THANKS TO NEW BUILDING CODES 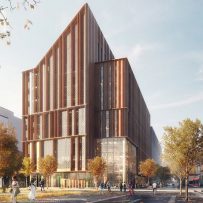 Tall towers have defined cities as “jungles” of concrete and glass. But what if we built highrises out of wood instead?

Proponents say that could have two benefits:

A five-storey residential building built with wood can store up to 180 kilograms of carbon per square metre — three times more than a high-density forest with the same footprint, according to a new study from U.S. and German researchers.

Not only that, but building with timber would cut emissions from steel and cement manufacturing by half.

So why haven’t we been doing it?

One problem is that the most common wood product used in modern construction until now — the two-by-four — doesn’t have the strength or versatility needed for constructing tall buildings, said Anne Koven, director of the Mass Timber Institute, which is based at the University of Toronto.

But in the 1990s, researchers in Austria and Germany invented cross-laminated timber (CLT), which uses adhesives to bind smaller pieces of wood into sturdy, fire-resistant panels and beams. “It’s an engineered wood product for building on the scale of cement and steel,” Koven said.

Designers, engineers and architects, including Russell Acton of Acton Ostry Architects in Vancouver, saw that and similar new products as an opportunity. “It was kind of like, now that we have engineered wood and we have an environmental interest, why not explore mass timber to get it back in use?” Acton said.

There was also another barrier: the maximum height for most wood buildings allowed by building codes in Canada was six storeys. Until now.

Acton and his team got a special exemption to build Brock Commons Tallwood House, an 18-storey student residence at the University of British Columbia and the tallest wood building in the world when it opened in 2017.

Since then, some provinces — most recently Alberta — have changed their building codes to allow highrises of up to 12 storeys. When it’s revised later this year, the federal building code will also allow that height.

Across Canada, there are plans to build more wood highrises, from 12-storey condo projects in Victoria and Esquimalt on Vancouver Island to 30-storey wood towers in Toronto proposed by Google as part of its Sidewalk Labs development.

Acton’s firm is working on the Arbour, a 10-storey building slated for George Brown College in downtown Toronto.

Despite the budding interest, Acton warns that builders haven’t yet worked out the “most economical” configurations for towers made of wood. For example, Brock Commons in Vancouver cost about seven per cent more than a similar building of steel and concrete.

“Everybody’s doing it for the first time,” Acton said. “It’s in its infancy.”