WINDSOR’S HOUSING MARKET IS THE HOTTEST IN CANADA 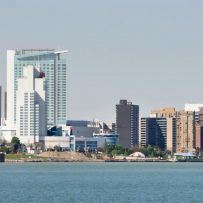 Windor’s real estate market is the hottest in Canada, with housing prices increasing 17 per cent in the third quarter of 2020.

The new Royal LePage Housing Price Survey shows the average home price for any type of housing in Canada sits at about $692,000.

Although Windsor is far below that at an average of $325,000 across all types of housing, experts say the city is growing fast.

“Windsor is catching up with other cities in southern Ontario,” said Windsor mortgage broker Rasha Ingratta.

“The house prices have been lower in Windsor compared to the average price in other cities with a similar population and close to the Greater Toronto Area,” said Ingratta.

People coming from across Ontario

With more people working from home during the pandemic, some cities like Toronto have seen an exodus of people from the core to surrounding suburbs like Mississauga, driving up prices in those cities. But Ingratta says the spike in Windsor’s market started a few years ago, well before the pandemic.

Other cities that saw notable growth include Kitchener/Waterloo/Cambridge with a 13.9 per cent increase this quarter. Hamilton saw a 13.7 per cent spike and Oshawa was second to Windsor with a 15 per cent increase. Toronto prices rose by 11.1 per cent.

One of the factor’s driving costs up in Windsor is that more students, immigrants and retirees are flocking to the region, says Frank Binder, Royal LePage Broker of Record.

Binder added that rental prices going up year over year have also made the city desirable for investors.

“Over the last two years we’ve had sustainable rent increases of about seven per cent which is not something you see in other cities,” said Binder.

Binder says that, compared to twenty years ago, there’s more new construction in the region with condos and affordable housing being built. Many investors are purchasing condos and renting them out.

In spite of that, some realtors say Windsor is experiencing a housing shortage.

“I’m in multiple offers on leases, let alone the listings that we have. We need to keep building, the demand is there,” said Germanese.

Some buyers out of luck

For many first time home buyers, the Windsor market offers substantially lower prices on average than the Greater Toronto and Kitchener/Waterloo area.

As the investor clientele grows and as people from across Ontario move to Windsor, real estate experts say these new buyers could push some locals out of the market.

“That other buyer that I’m seeing that’s being eliminated from the market due to these massive price increases is the single income first time home buyer unfortunately,” said Germanese.