WHY DOES TORONTO HAVE THE MOST CONSTRUCTION CRANES IN NORTH AMERICA BUT 65,000 EMPTY UNITS? 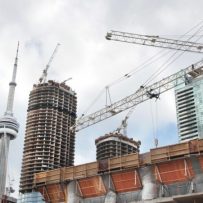 Toronto has more construction cranes than any city in North America with roughly two thirds of them working on condos. Why do we have so many and why are we building so many condos?

In Toronto, You Have to Build up

Individual landowners hiring out contractors to build their dream houses aside, most housing is built by developers looking to make a profit. From a financial prospective, condos are one of the most cost effective things to build. You can’t build a suburban subdivision in downtown Toronto, property values and of course, zoning laws make it impossible. With minimal space you have to build up.

When a property is being valued, one thing that is taken into account is the space’s highest and best use. In other words, land is valued based on the tallest, most expensive thing that could be there. This is another reason to build up. If there’s a condo next to a one-story restaurant it’s likely that restaurant could be a condo instead. So, that restaurant is going to be evaluated and taxed accordingly. This means that once one condo goes up, it’s almost inevitable that more go up around it.

Developers tend to prefer high-rise Condos over high-rise rental apartments. Unlike rentals, condos offer quick turnaround for investors; you sell and then you’re done, there aren’t the same kind of long-term obligations that come with purpose-built rentals.

Landlords have also gravitated towards condos. Condos have a lot of flexibility, if you want to get rid of a tenant there’s little to stop you from claiming that you’re taking personal possession of the unit. Then you’re free to rent it out to someone else or sell it.

For the buyer on the other hand, the appeal of the condo is that you can own a piece of real-estate when you may not want or be able to afford a house. In a market where even the most rundown house can cost around a million dollars, having a steppingstone like a condo becomes vital.

But why do these buyers even need a steppingstone? What makes houses so expensive in Toronto? One reason is government policy. Since the financial crisis of 2008 the federal government has periodically lowered interest rates. Low rates have made it easier to get mortgages but by stimulating demand without doing much to secure supply, the government has simultaneously increased housing prices in the long term.

Just because housing is being built doesn’t mean it’s being used as housing. Toronto has nearly 65,000 empty condo units. Why are they empty? One reason is that investors could simply be holding onto them until they feel comfortable selling. If you’ve got enough money for a $700,000 condo, it’s entirely possible that you can afford to pay the monthly fees without renting. This is especially true if you’re only looking to make a short term investment. When you’re trying to buy a place to live, you’re not just competing with people like you, you’re competing with people looking for a second or third property.

Clearly, there are a lot of factors influencing Toronto’s condo boom. Perhaps the most obvious is that Toronto is the centre of the Canadian job market. Toronto is the centre of finance, arts, and culture. It’s also a major centre of employment for teachers, professors, doctors, and lawyers. In other words, if you want to be at the peak of your profession in Canada, you’re probably going to have to live in Toronto. It’s not like the United States, where movies are made in Los Angles and stocks are sold in New York. By and large, it all happens here. With the government actually feeding housing prices and doing little to universalize housing, it’s only natural that competition is fierce, profits are hefty, and construction is plentiful.

Story by: View the Vibe