What’s next for Trudeau? A new cabinet, old wounds and fresh risks 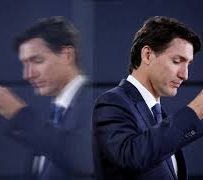 Justin Trudeau is still prime minister, but it’s going to be a rougher ride the second time around.

Trudeau eked out a victory in Canada’s election Monday, winning the most seats despite losing the popular vote. He fell short of a majority but should be able to pass legislation with the support of other parties, likely the leftist New Democrats.

Parliament’s return will force a change in strategy, and will likely reopen old wounds. Here’s how it could shake out.

Trudeau, as the incumbent, won’t see any gap or hiccup in his authority. He remains prime minister and has a wide-enough margin that he doesn’t have to bother with appointing opposition members to his cabinet. His first step will be to name a new cabinet, replacing and shuffling his ministers. He will also need to prepare a Speech from the Throne, outlining his legislative priorities. That speech could include clues of potential compromises with smaller parties.

He lost two ministers last week, Public Safety Minister Ralph Goodale — who had, among other things, been handling the Huawei 5G file — and Natural Resources Minister Amarjeet Sohi. Beyond that, others may be shuffled into new roles. Finance Minister Bill Morneau, for instance, spoke to BNN Bloomberg on Tuesday and gave no indication he thought it would be a slam-dunk that he’d stay in his role.

Trudeau will start feeling out two parties for their priorities: the Bloc Quebecois and the New Democrats. Each have enough seats to support him in any particular vote, though neither will enter a formal coalition with the Liberals.

Among the subjects up for negotiation, parliament needs to set up committees and decide who will be on them. In a majority government, Trudeau would have had the most members on any given committee. Now, he’ll be more exposed to opposition-led proceedings, where lawmakers could more easily dig into his SNC-Lavalin Group Inc. affair.

It’s also unclear whether Conservative Leader Andrew Scheer will retain control of his party, though he’s making a bid to. If he’s turfed, Trudeau could also govern with support from — or, more likely, a lack of opposition from — the Conservatives on certain votes, since the party won’t want to head into an election against Trudeau without a new leader.

Trudeau is pressing to expand the Trans Mountain pipeline, a potential flashpoint with the NDP and the Bloc. NDP Leader Jagmeet Singh, however, hasn’t ruled out the pipeline’s construction, saying on Tuesday he wouldn’t negotiate the terms of his support for Trudeau in public. The Bloc has indicated it won’t get in the way of the project proceeding.

The U.S.-Mexico-Canada trade pact still needs to be passed by Canadian lawmakers, though the country will only be under pressure to move quickly if the U.S. also ratifies the deal. Trudeau and the Conservatives would likely both back it, more than enough to get it over the finish line.

Work will also begin on a federal budget, due typically early in the new year. Budget motions are confidence votes that could bring down a minority government; Trudeau will need to be sure his document has the support of either the NDP or the Bloc, as the Conservatives would be highly unlikely to support it.

How Long Can This Last?

It depends. The last few Canadian minorities have averaged just under two years, but each one is unique. In this case, the math of parliament means that either Trudeau’s own party, or Singh’s NDP, would need to vote against the government.

Each would only do that if they wanted to trigger an election. The NDP is broke, just lost seats from 2015 and was nearly wiped out in Quebec, a one-time power base — and yet came away with the balance of power. That makes them unlikely to rock the boat any time soon.

Another factor: Canadian members of parliament are entitled to a pension after six years of service. That creates an incentive for individual MPs first elected in 2015 to leave Trudeau’s minority standing for at least two years. All that suggests Canadians won’t head back to the polls before late 2021, at the earliest.