WHAT WILL THE NEXT FEW MONTHS LOOK LIKE FOR THE RENTAL MARKET IN CANADA? 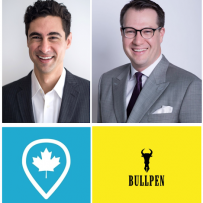 The average rent for all properties in Canada increased 1 per cent in March over February to $1,842, but decreased by 1.2 per cent annually, according to the monthly National Rent Report from Rentals.ca and Bullpen Research & Consulting.

Uncertainty rules the rental market as the coronavirus pandemic plays out, but one good bet is that average monthly rental rates will decline in the next few months.

By how much could depend on some variables including: how many will be laid off, lose hours, or take pay cuts; how many renters will not want to move; how many tenants will not pay rent and how many would-be home buyers will choose to continue to rent.

Consider also fewer evictions per government decree, less immigration, fewer students starting new jobs, and more young adults moving back in with their parents to save money. The latest report indicates those between the ages of 15 and 24 took the worst hit in job losses.

It might be too early to assess the impact of the pandemic on the Canadian rental market from March listings data from Rentals.ca, but if the results are any indication of what is to come, a large rent decline isn’t likely.

Toronto had the highest average asking rents in Canada in March for apartments (both tenures) at $2,450 per month, followed by Vancouver at $2,381.

Several Ontario municipalities and former municipalities have experienced significant rent growth year over year with Kitchener up 23 per cent, Hamilton up 22 per cent, Scarborough up 18 per cent, and North York up 12 per cent. Saskatoon rents declined by 24 per cent annually. 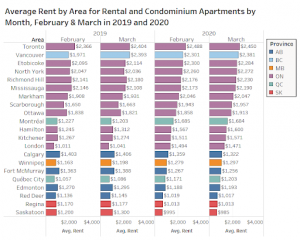 The chart below shows the month-over-month change in average rents for only rental and condominium apartments in the same municipalities and former municipalities in Canada. 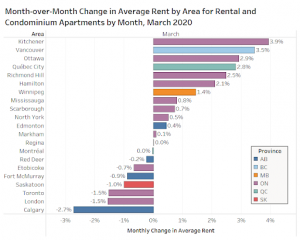 Other takeaways from the April National Rent Report include:

“Despite the global pandemic, we still experienced an increase in search activity on Rentals.ca in March,” said Matt Danison, CEO of Rentals.ca. “Even with financial uncertainty, people with stable employment will be looking for deals in many of the markets that were strong before the COVID-19 crisis.”

“With the national economy partially on pause, a significant portion of tenants have been laid off or unable to work; they will not be looking for apartments, and in many cases won’t be able to pay their current rent,” said Ben Myers, president of Bullpen Research & Consulting. “Our expectation is that rental rates will decline in the coming months, but some of that decline will not be captured due to a big increase in upfront incentives”