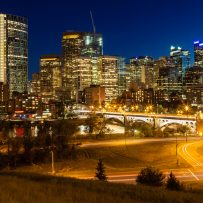 The transition to a low carbon economy could take many paths.

Hydrocarbon fuels have been part of our lives for decades, taking civilization from an economy built around wood and coal to one far more affordable and and efficient, with an increased quality of life. While oil and gas will continue as part of Canada’s energy mix for some time to come, the transition to a lower carbon future is inevitable. Four energy futurists share their visions on what that transition could look like.

David Layzell is director of the Canadian Energy Systems Analysis Research initiative. He sees reduction of greenhouse gases (GHGs) produced by fossil fuels as paramount, but believes Canadians will respond more favourably if that reduction is tied to other reasons for making changes in our energy systems.

By focusing on positive changes to eliminate inefficiencies in many of our systems, we can influence demand for hydrocarbons and achieve climate change goals.

“Personal mobility is an example of an energy system that has serious problems. Additionally, it is a major source of GHGs,” he says.

Cars, he argues, kill and injure more than 10,000 Canadians per year, cause pollution and represent an inefficient use of personal capital as an expensive purchase that sits unused most of the time.

“By encouraging autonomous electric vehicles that offer transportation as a service, for example, we provide a vision of the future that promises something positive,” he says. “It offers increased mobility at lower cost, greater safety and cleaner air. By focusing on positive changes to eliminate inefficiencies in many of our systems, we can influence demand for hydrocarbons and achieve climate change goals.”

Amin Asadollahi is the North American lead on climate change mitigation at the International Institute for Sustainable Development. He doesn’t see an overnight elimination of hydrocarbons, but envisions the adoption of sustainable energy sources as an inexorable movement toward greater efficiency as well as an environmental imperative.

“We have a short window to bend the emissions curve and decarbonize our economies by mid-century according to the Paris Accord to make a meaningful impact on climate,” he says. “That’s not tomorrow, but it’s not a century from now.”

While government policy may initially drive consumption and production of cleaner sources of energy, he sees declining energy costs as the driver that will make renewables a logical energy choice.

“We can either wait to see those changes transform the world economy around us, or we can prepare our economy to remain competitive now,” he says. “It’s an opportunity to thrive and grow our economy and find new businesses to invest in. We can use our energy infrastructure to diversify and become an exporter of clean energy and clean energy technologies.”

Peter Tertzakian is executive director of the ARC Energy Research Institute. He says that we’ve already passed an energy breaking point last decade that is triggering a change in the way we choose to produce and use energy.

“The primary catalysts were: environmental forces such as toxic degradation; climate change awareness; scarcity, which drove up price; and geopolitics, which included battling over resources and energy insecurity,” he says.

He believes we’re now in a transitional phase where oil, natural gas, coal and renewables are jockeying for market share. However, don’t count out hydrocarbons yet.

“The Model T Ford was seen as overwhelmingly superior to the horse and buggy,” he says. “You couldn’t develop a horse on steroids to compete, but there’s plenty of room for innovation in fossil fuels both upstream and downstream. The oil and gas sector can become more efficient and reduce GHGs, while cars that run on gasoline can simply be made stronger and lighter to reduce emissions.”His message to energy producers: “Don’t underestimate the ability of all suppliers to innovate. Drive costs down and improve your product, or someone will eat your lunch.”

Meredith Adler is executive director of Student Energy, an organization founded to deliver unbiased energy information to students and empower the next generation of energy leaders.

“Canadian youth have a nuanced view of the energy landscape,” she says. “We work hard to create a space where students can meet on common ground to imagine a transition to a sustainable energy future.”

Empowering youth to be part of a low-carbon or carbon-free future is part of the organization’s mandate. Working toward autonomous, electric vehicles or passive houses, for example, is a part of that journey.

“We’ve grown up in a period of rapid technological change and we want to see the roadmap to get us there,” she says. “We’re very invested in achieving the goals we envision. It might include hydrocarbons, and it might not. We represent a lot of young entrepreneurs who are working on technologies such as solar energy and carbon capture and storage, and we want to see them working with more established professionals to develop the big solutions. Young people are great partners in helping society to achieve sustainability.”

All four potential paths take Canadian energy to the same place — a lower carbon future with a mix of energy sources. How we get there will be the most interesting part of the journey.