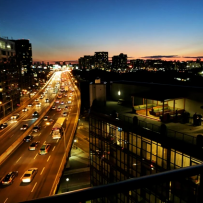 It has long been accepted that the most valuable urban land is near or in downtown areas, and users compete to occupy land whose value or utility declines with distance from the centre.

This bid-price (rent) theory has been one of the staples of urban economics since the pioneering work of American economist William Alonso in the 1960s. Typically, the rent gradient is a downward sloping curve that portrays how land values or rents decline with distance from the city centre, but COVID-19 has disrupted this spatial equilibrium such that the rent gradient is less steep now than before the pandemic.

The lure of living downtown, while still highly desirable, has slightly diminished since the onset of the pandemic, with the faster increase in suburban real estate values, relative to the urban core, in large North American markets suggesting that, at least for the time being, knowledge economy workers prefer a hybrid working model, allowing them to work from their homes on the outskirts.
Stated differently, the pandemic has been busy flattening the (rent) curve.

An update on housing markets by the Bank of Canada in April also highlighted the pandemic-induced change in location preferences. “Homebuyers now appear to favour suburban and rural areas, partly as a result of the shift to remote work,” the central bank noted. In the fourth quarter of 2020, housing prices rose at an increasing rate with distance from the respective city centres in Montreal, Ottawa, Toronto and Vancouver.

The preference for the suburbs is likely motivated by the preference for larger dwellings. The Bank of Canada’s report said prices of single-family homes increased by more than 20 per cent in February year over year. By comparison, the increase in condominium prices was less than five per cent. Before the pandemic, condominium and low-rise housing prices moved at a similar rate.

A recent paper by Arpit Gupta, an assistant professor at New York University, and others revealed even more dramatic shifts in the 30 large Metropolitan Statistical Areas in the United States. Their analysis showed that the “pandemic brought house price and rent declines in city centres, and price and rent increases away from the centre, thereby flattening the bid-rent curve.”

Two primary determinants influence the flattening of the curve. The first enabler, the authors noted, is the prevalence of working from home (WFH). The second is all the regulatory barriers that constrain new housing construction.

What does this all mean for the future? Investors and households can formulate strategies based on their assumptions of the post-pandemic world. If a return to the pre-pandemic equilibrium (including employees returning to their cubicles in tall office towers) is the likely scenario down the road, centrally located neighbourhoods will likely see their fortunes approaching former levels. This implies that future rents and prices will likely grow faster in the urban core if a return to the old “normal” is in the cards.

However, a return to pre-pandemic conditions will not be immediate. The gradual resurgence and acceptance of commuting downtown via public transit will be a significant contributing factor to the pace and scale at which city cores repopulate.

There is also the possibility that companies might continue to substitute WFH-enabling technology for expensive real estate in the urban core. Businesses are likely to renew their commercial leases in the future, but their consumption of high-priced space might be relatively lower, depending upon the extent of their teleworking employees. Moderating demand for commercial real estate in the urban core could further contribute to a flatter post-pandemic bid-rent curve.

Knowledge economy workers, who usually dominate labour markets in the urban core, are well-positioned to negotiate flexible work schedules by virtue of their roles and responsibilities, which can be easily accomplished remotely.

Even if one in five workers partially works from home in the future, the return to pre-pandemic demand levels for downtown real estate will not be soon. But over time, with growth in demographic and economic footprints, the demand for centrally located real estate could reach pre-pandemic levels.

Either way, the urban-suburban rivalry will continue to unfold as places compete for residents and workers. Consumer preferences and WFH technologies will play increasing roles in determining the future desirability of a location.