WHAT DOES THE FALL ECONOMIC STATEMENT MEAN FOR RENTAL HOUSING PROVIDERS 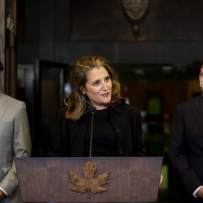 Finance Minister Freeland delivered the Fall Economic Statement on November 30. The main areas on which the Statement affects rental housing providers are the following:

The government has announced another $12B of loan support for new rental construction under the Rental Construction Financing Initiative (RCFI) over the next seven years. That is expected to support the construction of 28,500 additional rental units at close to $420,000 per dooor. The money will all be in the form of loans at a favourable interest rates based on the interest rate paid by the Government of Canada. In many cases, the loans can be used to replace construction financing. As with qualifying for the existing RCFI lending capacity of $13.75B, rental developers need to meet affordability targets, energy efficiency targets and accessibility requirements.

CFAA applauds the expansion of the RCFI. Most of all, we applaud the signal the expansion sends, that the development of for-profit rental housing is still valued by the government, as a major contribution to housing affordability through the move-up effect. Often the new rental units themselves are not particularly affordable, but renters who move into them almost always free up other rental units at lower rents, and that effect runs through the whole rental market, making low-end rental units more available to those who need them.

CFAA remains concerned that the targeting of the RCFI could be improved if the affordability standards were related more to the average market rents in different cities, rather than to affordability defined by average incomes in the cities. Put specifically, more funding should go to developers in Greater Toronto and Greater Vancouver, rather than to other cities where rents are lower.

The sum of $2.6B is being allocated to help 750,000 homeowners make energy-efficient improvements to their homes. The government also recognizes that homeowners and landlords need to be able to access simple and affordable financing to make deeper home energy retrofits. Over the coming months, the government will outline details of a low-cost loan program that integrates and builds on available energy audits and grants, and which can be easily accessed by Canadians. CFAA will provide input on those details.

A small expansion of the First Time Homebuyers incentive

To make homeownership more affordable, the government launched the $1.25 billion First-Time Home Buyer Incentive in September 2019. The incentive is a shared equity mortgage that allows eligible first-time home buyers to lower their mortgage payments by sharing the cost of buying a home with the government. In exchange, the government shares in the equity growth.

The government is expanding eligibility in Toronto, Vancouver and Victoria, Canada’s highest priced housing markets. With the expansion, eligible buyers in those cities will be able to purchase a home up to 4.5 times their household income, an increase from the current limit of 4 times household income. In addition, the eligible buyer’s income maximum is being raised from $120,000 to $150,000 for Toronto, Vancouver and Victoria. These changes will come into effect in Spring 2021. With a minimum down payment, this targeted expansion will raise the maximum house price eligible for the program in those cities from about $505,000—the current program limit—to about $722,000.

That program change may lead to a small decrease in rental demand in Toronto, Vancouver and Victoria. Such a decrease in demand will not be welcome to rental housing providers, given the decrease in market rents in the downtowns of those cities. However, many of the households who use the expanded program may already live in the suburban areas, where rental demand has held up well until now.

No new taxes on rental investments

Perhaps the best news in the Fall Economic Statement is that the government did not announce any moves to review the capital gains tax, or to impose any interest deductibility limitation on businesses or rental housing. Those are moves that were being contemplated before COVID-19 struck. They are also still being advocated by the NDP. However, CFAA met key decision makers, and explained the negative impact either move would have on the rental supply and on housing affordability. Those moves appears to be off the table for now.