Week-long event a rare glimpse into the future 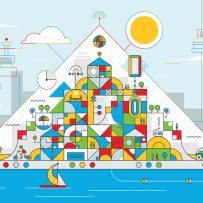 Beginning Monday, Torontonians will have a week to get acquainted with their future.

In collaboration with the City of Toronto, Toronto of the Future will bring together the city’s real estate developers, architecture firms and government agencies at the Metro Hall between June 25 and July 1 where they’ll regale the public with 3D models, Illustrations, visual presentations, and more.

According to Robert J. Vezina, president of Cities of the Future Management, the event is a gateway into the future of North America’s fastest growing city.

“It’s a unique event because there’s absolutely no parallel to it,” Vezina told CREW. “Nobody else does what we do, which is assemble in one place companies that, for all intents and purposes, are competitors, but at Toronto of the Future they’ll be working in tandem to put their city on display. We convinced them all to come together to share information about the city’s future and they’ll do so through big presentations.”

Much planning goes into the biannual event, and with good reason: Large-scale models, including an 11-ft scale of The One by Mizrahi Developments—which is also Toronto of the Future’s top presenting sponsor—as well as transportation and infrastructure presentations will act as a crystal ball of sorts for attendees to the free-of-charge event. For the discerning real estate investor, Toronto of the Future could very well inform their businesses’ future plans.

Taking its cue from a similar event in Montreal, Toronto of the Future will be making its third appearance in the city and there could be more planned for other cities, including Vancouver and New York.

The City Planning Division of the City of Toronto will also be on hand to present the public their vision. Vezina mentioned that while the event free of charge to the public, it will be heavily attended by the local real estate community’s key stakeholders.

“They will get to see how their city will develop in years to come.”