WE ASKED FOR YOUR TOP ELECTION ISSUES. HERE’S WHAT YOU TOLD US 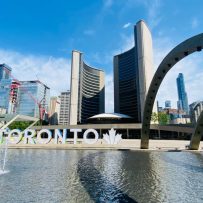 Toronto’s municipal election is just over a month away. That means it’s time for voters to start thinking about what issues matter most to them.

With 31 candidates vying for the mayor’s chair and 164 candidates running for a seat on council, this election will shape the city for years to come.

Last week, CBC Toronto asked you to tell us about the concerns that are top of mind heading into the Oct. 24 vote.

From nearly 100 responses to date, clear threads have emerged — most of them connected to seemingly perennial frustrations of many who call Toronto home.

Two topics in particular come up over and over again: safety (or lack thereof) on city streets and the housing crisis.

There were also issues that intersect with other elements of daily life in Toronto like public transit, construction and policing.

Here’s a sampling of some of what you told us so far. We’ll keep this story updated as the campaign unfolds.

The question of roads and who they should be for is a near-constant point of political tension in the city. It’s clear from responses that making safer streets for cyclists and pedestrians is a key issue for many voters.

“Prioritize cycling and pedestrians over cars in every area of the city, but especially downtown,” one respondent who lives on the Danforth wrote. “Build separated bike lanes on every street. Make it easy to walk and cycle.”

Similar sentiments were echoed by others.

“Toronto needs to … reduce speed limits to 30 km/h on all residential streets and 40 km/h on all arterials (unless higher speed limits can be reasonably justified), and complete the Bloor-Danforth-Kingston and Yonge bikeways to the city boundaries by 2026. A considerably faster pace of bike lane installations is needed,” a downtown respondent wrote.

Several people who filled out the informal survey also said they would support making right turns on red lights illegal in the city.

Of course, bike lanes and pedestrian infrastructure aren’t supported by everyone, particularly drivers who feel they contribute to Toronto’s infamous traffic congestion.

“Remove bike lanes. Main streets like Bloor and Yonge are gridlock at one lane. Emergency vehicles can’t even get by. CafeTO is a pandemic thing of the past and unnecessary and always empty when I pass by. Also gets torn down way too late in November clogging up more traffic unnecessarily,” wrote one respondent from midtown.

Just as in June’s provincial vote, the crushing cost of housing and an increasingly dire lack of affordable options will be a top issue in the municipal election.

Many respondents said they support significant zoning reforms to allow for more mid-rise construction, or what is sometimes called the “missing middle.” The province’s housing affordability task force found in its February 2022 report that in roughly 70 per cent of Toronto — a roughly 200 square kilometre area known as the Yellow Belt —  zoning guidelines prevent all but single-family homes from being built.

“End exclusionary zoning. Cease the endless meetings and delays for every single attempt to make homes for people,” wrote one person.

“Modify zoning restrictions to allow for mixed buildings — retail at street level, residential above — up to six floors on any street served by transit; buildings up to three floors on residential streets the subdivision of lots; and the waiving of development fees for rental housing that includes 20 per cent affordable units,” wrote another from East York.

Housing affordability has already featured prominently on the campaign trail. Mayor John Tory, who is running for re-election, used his first official campaign event to lay out his plan to get more housing built. You can read about it here.

Meanwhile, Gil Penalosa, one of Tory’s challengers, has also released a detailed housing plan, which you can read about here.

Many local councillors are also putting housing at the core of their platforms, while the advocacy group More Neighbours Toronto has registered as a third-party advertiser for the campaign.