Wall Street landlords: These four companies have spent billions on distressed homes in the US 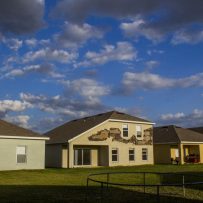 At the end of third quarter of 2014, the Census Bureau reported that the US home ownership rate hit 64.4 percent, the lowest level for the country since the first quarter of 1995. While individuals might be standing on the sidelines of the housing market, investment firms, real estate trusts and Wall Street institutions have been scooping up distressed houses — those in the foreclosure process or bank-owned — in bulk and renting them out.

More recently, sales of these problem properties are trending downward. According to the latest numbers from RealtyTrac, a real estate information company, distressed home sale and short sales  – where the proceeds from selling the property will fall short of the home’s balance of debts – accounted for 12.6 percent of all residential property sales in November. That number was down from 13.7 percent the previous month, and down from 14.8 percent in the same time last year.

However, big-time investors with their eye on snapping up these homes are still a major force, pushing up prices in many markets and creating expansive rental empires. RealtyTrac found that the median sales price for a distressed home reached a high of $128,625, up 18 percent from the same time last year. It’s also the highest median price since December 2009.

“As the price of distressed properties reaches a new high, the pool of investor activity that has been fueling the housing recovery may dry up,” said Daren Blomquist, vice president at RealtyTrac.

“However, 20 states still saw annual decreases in distressed property prices so we will continue to see a fragmented recovery as investors move from once-hot markets such as Phoenix, Atlanta and many California markets and into markets such as Charlotte, Columbus, Ohio, Dallas and Oklahoma City.”

The trend of Wall Street landlords purchasing forecloses home is well documented, though many of the larger companies snapping up houses across the country are also acquiring homes from other investors or even merging with other financial groups.

In short, the company says the single family rental industry is at a crossroads. With prices for properties continuing to inch upwards, many are speculating that these bigwigs are looking to cash out.

Just how much do they stand to gain? In December, RealtyTrac analyzed 200,000 purchases made by institutional investors (i.e. those who bought 10 or more purchases during a calendar year) between January 2012 through August 2014. The average price for a property bought by investors was $167,556. The current value rose up to $211,897, a potential gained equity return of 26 percent or $8.9 billion if all of those properties were sold.

In March of 2014, four heavy-hitters formed a trade group called the National Rental Home Council to further their collective interests. We decided to take a look at the biggest players on the scene. See just how many houses they’ve purchased for their rental portfolios below:

Background: The company is an offshoot of Blackstone Group, which is believed to be the largest alternative investment firm in the world. It has bought more than 44,000 homes since its start in 2012.

Big buys: In October 2014, Invitation Homes picked up 4,048 single-family properties, mostly in California and Florida with a total value of $981,826,183. The average monthly rental payment for these houses was approximately $1,573.

A study by the Institute for Housing Studies at DePaul University suggested that in 2013, the Blackstone Group offshoot scooped up 1,300 single family properties in Cook County, in and around Chicago, Illinois.

Background: The real estate investment trust (REIT) was founded by by B. Wayne Hughes, the billionaire behind Public Storage, in 2012. In October 2014, it topped Housing Wire’s list of the 50-fastest growing companies in the housing economy after seeing its revenue grow nearly 3,000 percent during 2013. While revenues increased between the second and third quarter of 2014, the company also had a net loss of $12.8 million for the third quarter of 2014.

Big buys: In the Indianapolis area, some 1,700 houses were purchased for $252 million, according to 2013 reports based on security filings. In July 2014, it acquired Beazer Pre-Owned Rental Homes, Inc., adding more than 1,300 homes located in markets in Arizona, California, Florida and Nevada to its portfolio. And at the start of 2015, the company bought 900 single-family homes from Ellington Housing for approximately $126 million.

Interestingly, the company bought 81 houses in Wake County, North Carolina between December 2012 and February 2013 for about $13.3 million. According to The News & Observer, the properties weren’t just distressed houses or existing properties, with about a third of the homes purchased straight from the homebuilders.

Background: A subsidiary of Colony Capital, an international investment firm based out of Los Angeles, California, the company got its start in 2012, though Colony Capital’s history dates back to 1991. Since its founding, Colony Capital has invested in approximately $60 billion in real estate.

Big buys: In March 2014, Colony American Homes snapped up 3,399 homes for $513 million. According to Morningstar Credit Ratings, the homes are located in Florida, California, Nevada, Arizona, Georgia, Texas and Colorado.

Background: Started up in 2009, one of the company’s co-founder is former NFL placekicker Doug Brien. Starwood Property Trust, an affiliated of the private investment firm Starwood Capital Group, merged with Waypoint in 2013. The real estate investment trust (REIT) is now known as Starwood Waypoint Residential Trust.

Big buys: The company acquired 1,358 homes in Q3-2014 investment for about $231.4 million. According to the company, that works out to about $170,378 per home after including estimated investment costs for renovation. In Q2-2014, the corporation picked up 1,943 homes for an estimated total investment of $303.6 million.

We’ll be following the trend with a story on the major American markets that are continuing to see increases in distressed and short sales.