Wage of $27.40 an hour needed to afford two-bedroom apartment in Brampton: Report 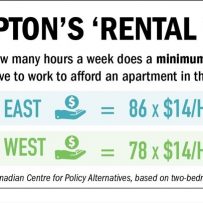 A recent report by the Canadian Centre for Policy Alternatives (CCPA) showed a new resident would need to earn at least $27.40 per hour to afford rent for an average two-bedroom apartment in Brampton.

The report, titled “Unaccommodating: Housing rental wage in Canada,” looked at the hourly wage needed to afford a two-bedroom unit in 795 neighbourhoods across the country. The CCPA also broke down how many hours per week a minimum wage earner would have to work in each area to make rent each month.

Brampton was split into two regions in the study — east and west. According to the report, the Eastern side of Canada’s ninth-largest city is more expensive with a required minimum wage of $29.92 per hour to afford a two-bedroom apartment.

A person earning $14 per hour — the current minimum wage in Ontario — would have to work 86 hours per week to be able to make up the difference.

Things weren’t much more affordable in the city’s west end, with a renter needing to earn at least $27.40 per hour over a 40-hour work week and a minimum wage earner needing 78 hours per week to afford a two-bedroom unit.

The most recent data from Rentals.ca showed the average rent for a two-bedroom in Brampton in June was $1,773, with the average cost for one-bedroom coming in at $1,443.

The CCPA also measured seven areas in neighbouring Mississauga and found a person or family looking to rent a two-bedroom apartment in that city would need to earn between $25.30 (Malton) and $34.21 (Meadowvale) per hour to make ends meet.

“There are no neighbourhoods in Canada’s biggest cities (Greater Toronto Area and Metro Vancouver) where a full-time minimum wage worker could afford either a modest one or two-bedroom apartment,” said the CCPA in the report, while recommending governments across the country increase the amount of affordable housing available.

“There are only 24 of 795 neighbourhoods (3 per cent) in Canada where a full-time minimum wage worker can afford to rent an average two-bedroom apartment, and in only 70 neighbourhoods (9 per cent) can they afford a one-bedroom,” it added.