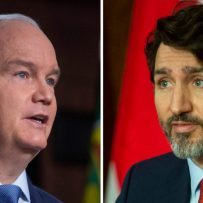 With the leadership debates now in the rear-view mirror and polls showing a close race between the Liberals and Conservatives, the issue of vote-splitting is becoming increasingly significant ahead of the Sept. 20 federal election, according to pollster Nik Nanos.

“If you’re [Conservative Leader] Erin O’Toole and play fantasy politics, you’d say ‘what would the world look like without Maxime Bernier?’” Nanos said on Friday’s edition of CTV’s Trend Line podcast. “On the other side of that we’ve got the NDP. I imagine there’s quite a few ridings where Justin Trudeau might be sweating, considering NDP support.”

While it’s too early to know exactly how Thursday’s English-language debate will affect voter preferences, polling data continues to show a statistical tie among the two leading parties.

It’s a result that suggests a minority government for either party is the most likely result. But the picture could change if either party is able to siphon support from other parties, particularly the NDP or Bernier’s People’s Party of Canada (PPC), says Nanos.

The NDP, traditionally ideologically left of the Liberals, are at 19.2 per cent in the latest tracking, while the PPC, which are further right than the Conservatives on the political spectrum, have seen their support build through the campaign to sit at five per cent.

“If you add the People’s Party at five per cent and the Conservatives at 33 per cent you put the Conservatives into majority territory at 38 (per cent),” said Nanos. Likewise, with the NDP having consistently polled around 20 per cent throughout the campaign, there is the potential for the Liberals to either gain votes from, or lose them to, the party.

“I think we saw a little bit of that at the at the end of the (debate) where [Liberal Leader] Justin Trudeau was interjecting with [NDP Leader] Jagmeet Singh, and basically trying to tell people, ‘if you want to stop the Conservatives there’s only one option if you’re a progressive voter and it’s the Liberals,’” Nanos said.

According to Nanos’ preferred candidate tracking, there is still room for support to shift, as 12.6 per cent of Canadians say they are still unsure of their preference.

The latest data also shows Trudeau polling at 30 per cent as voters’ preferred prime minister, compared to O’Toole at 27.1 per cent and Singh at 19.9 per cent. Bernier is at 5.5 per cent, Bloc Quebecois Leader Yves-Francois Blanchet is at 3.2 per cent, and Green Party Leader Annamie Paul is at 1.6 per cent.

“If the NDP continue to hold their numbers… it’s just going to be mathematically very difficult for the Liberals to win a majority government,” said Nanos.

Bernier, who was not invited to the debate, has seen support for his party grow steadily throughout the campaign, from 1.9 per cent on Aug. 12 to the latest result of 5.0 per cent.

Nanos said that the demographics of PPC supporters tend to skew young and male, which is similar to the makeup of far-right movements that have been prominent in the United States and other countries.

“We see that same international trend in Canada in terms of the demographic for these populist parties being younger and more likely to be male,” he said.

A national random telephone survey (land- and cellular-line sample using live agents) of 1,200 Canadians is conducted by Nanos Research throughout the campaign over a three-day period. Each evening a new group of 400 eligible voters are interviewed. The daily tracking figures are based on a three-day rolling sample comprising 1,200 interviews. To update the tracking a new day of interviewing is added and the oldest day dropped. The margin of error for a survey of 1,200 respondents is ± 2.8 percentage points, 19 times out of 20.

The respondent sample is stratified geographically and by gender. The data may be weighted by age according to data from the 2016 Canadian Census administered by Statistics Canada. Percentages reported may not add up to 100 due to rounding.