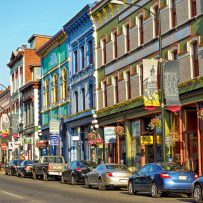 Mike and Kara Tkachuk, owners of Valhalla Pure, relocated the outdoor gear retailer from Langford to downtown Victoria. They say a revitalized core with thousands of new residents was behind their decision.

When Mike Tkachuk purchased the region’s Valhalla Pure Outfitter outdoor gear store this spring, one of the first things he did was prepare to move it back to downtown Victoria from its suburban Langford location. 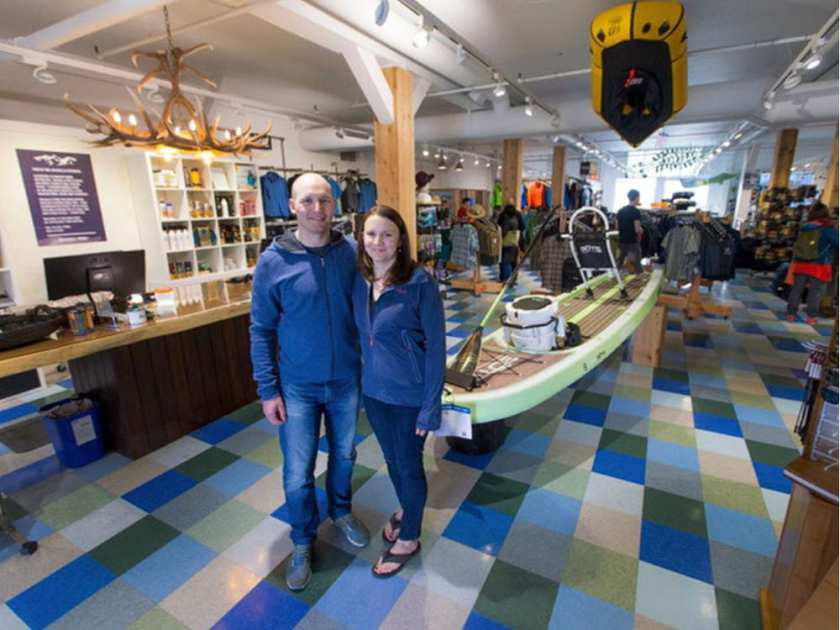 Mike and Kara Tkachuk, owners of Valhalla Pure, relocated the outdoor gear retailer from the suburbs to downtown Victoria. They say a revitalized core with thousands of new residents was behind their decision. DARREN STONE / TIMES COLONIST

“I definitely think it’s the place to be,” said Tkachuk, who opened this week downtown. It’s a return to the store’s roots. The store opened downtown on Broughton Street in 1991 before moving to Langford 10 years ago.

“The traffic never materialized, the (previous owners) were promised a lot of things that didn’t materialize out there,” he said.

“And we are excited about being back downtown. There’s so much more traffic, tourists and people who live there.”

Only a few years ago, downtown Victoria was littered with vacant store fronts.

But that has changed. Many businesses are finding new homes downtown. Vacant store fronts are a rarity with new restaurants, retailers and service providers wanting to be where the action is.

Colliers International’s most recent retail and office real estate report on the region said space is being snapped up and that is expected to continue through this year and 2018.

The report noted strong tourism numbers, a significant increase in the number of people living downtown and an increased high-tech presence have combined to create new life downtown.

The retail street-front vacancy rate dropped by more than three percentage points to 5.45 per cent by the end of 2016 — the lowest rate since 2010.

The office market’s vacancy rate dropped below eight per cent by the end of 2016, the first time that’s happened in seven years.

Builders are reacting to the strong market. Scanning the downtown skyline, there are cranes at every turn, and more mixed-use projects and residential towers are planned.

Victoria Mayor Lisa Helps said 5,775 people have moved into the city, which had a population of about 85,000 people in the most recent census, in the last six years. There are nearly 1,800 housing units under construction and at least that many more in advanced planning. Plenty of people want to live in those units. The rental vacancy rate is estimated at 0.5 per cent, and the shortage of housing has led to for-sale properties becoming the subject of multiple offers, cash deals and sale prices well above asking.

“We are no longer a secret, people have discovered us,” said Victoria Coun. Margaret Lucas, who sits on the board of the Downtown Victoria Business Association.

Lucas, who runs the Rialto Hotel on Douglas Street, which was in the vanguard of the renewal of downtown when it was completely refurbished in 2007, said the city is playing catch-up in terms of building housing to meet demand.

She said the city and the Downtown Victoria Business Association have worked over the last several years to re-energize the core by bringing all sectors — tourism, tech, government and retailers — together to plan.

Lucas said the energy of downtown has led to a retail resurgence, as the sheer number of new downtown residents forced the market to react.

“They are younger people, and a lot of them are associated with the high-tech industry and they want restaurants to go to, coffee shops and retail stores, and they are looking for uniqueness when they shop downtown.”

“I had anticipated Victoria to be at this state five to seven years from now. We seem to have hit hyper-speed in terms of people coming here,” Sipos said. “Victoria now has this understated vibrancy about it, especially in the downtown core.”

It has Sipos excited about getting started on his $40-million mixed-use redevelopment of the Customs House building at Government and Wharf streets on the Inner Harbour. Sipos has prepared the inside of the building for demolition and expects that will start around Labour Day when the tourist traffic slows.

The project includes demolition of the Canada Customs building at 816 Government St. and completely gutting and renovating the adjoining heritage building that faces Wharf Street.

Sipos said the new feel of Victoria and its buoyant property market has made getting started easier. ‘‘It was going to be a struggle to build a great building and a great project,” he said. “What the market has enabled us to focus on is extraordinary detail and not to be so concerned — we know we can walk away alive at the end of the day.”

The market has attracted a lot of Vancouver developers. Chard, Townline and Bosa have been in Victoria for years, and the resurgence has also attracted smaller Vancouver players.

Two Vancouver developers have purchased large sites on the south side of Fort Street between Quadra Street and Blanshard Street with the intention of revitalizing and reinventing the retail block.

Parc Retirement Living has secured eight parcels covering 42,000 square feet with plans to develop a mixed-used project. Rick Marzolf, principal of Marzolf and Associates, which works with Parc on community engagement, said the plan is to build a 250-unit independent-living facility for seniors that will offer retail space along Fort Street.

“It is for active seniors who want to be engaged in the downtown community.”

Parc has four facilities in the Lower Mainland and another planned.

Marzolf said Victoria fit the bill for the next development as it has had new life breathed into it, is the right size and has the right demographic.

“There is a some shift going on here; it’s no longer the newly wed and nearly dead. This whole city is changing.”

The company has not yet made a formal application to develop the site, though Marzolf said that could come as early as July.

On that same block, the Salient Group has picked up 10,000 square feet at 825 and 827 Fort St., and said it is looking at a mixed-use project that could include a residential component, and a retail presence along Fort Street.