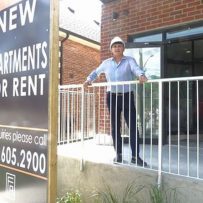 The building is like a “mini condo,” Morelli said in awe of the building’s modern-feel, yet made matching next to a heritage home. Unlike older rentals, this building’s units come with their own washing machines and dryers each, and underground parking.

First Avenue also had to change its plans for the sidewalk to save a chestnut tree in front of the building.

“We have so many requests, it’s unbelievable,” Morelli added, describing the building’s vicinity to bakeries and shops people can walk to.

There aren’t enough rental buildings for demand in the Greater Toronto Area, and increasing their number would mitigate the affordability crisis and feed into what people describe as the “missing middle.”

“Before the pandemic, demand for rental housing was near a 40-year high, but supply was not keeping up, with over 80 per cent of existing purpose-built rental units built before 1980,” said Tony Irwin, president and CEO of Federation of Rental-housing Providers of Ontario, citing a figure from Urbanation, a research real estate consulting firm, of how Ontario will have a “housing supply gap of 200,000 rental units over the next decade.”

Coinciding with Irwin’s figures, Morelli explained why there aren’t many of these much-needed rentals with people having not many options. The two also explained that financing is one major hurdle to build rentals.

“Financing a rental building is different from a condo. With condo buildings you presale, and when you sell the units, the bank would give you the finances. However, for building rentals, there are no sales, you only rent after the building is completed,” Morelli added, urging for both regional and municipal “assistance” in this.

“It isn’t feasible,” he said, describing how income only starts coming after the building is completed and through a long-term basis with “no guarantees from a bank that it would work.

He also said that the development process is a long one. “It takes seven years to purchase land, get approvals, build, and get paid for it. It’s a seven-year cycle.”

But it’s easier to make money when building an expensive detached-home for example.

“It’s easy to accommodate people when they are rich, but it is a different challenge for people who are not,” Morelli said.

Instead, Morelli financed the rental property from his pocket to give back as a Vaughan resident of 40 years and to build some investments for his own children.

There are other reasons why rental supply isn’t keeping up with demand, Irwin added.

“The development approval process often poses a significant barrier to building new housing in Ontario, whether it be for purpose-built rentals or condos,” Irwin expanded.

He said zoning is “out-of-date,” meaning there are often hurdles to build a property over a certain size, there is NIMBYISM (Not In My Back Yard) from neighbours objecting to certain types of development, and delays at the Local Planning Appeal Tribunal (LPAT), all of which contributes to significant delays and increased costs, which make many rentals projects unviable.

Vaughan residents whom we’ve previously interviewed who objected to new highrises have wholeheartedly rejected the NIMBY term, saying that they aren’t against intensification, but in favour of proper planning, especially amid traffic gridlock problems.

Irwin believes in building infill development on existing sites, reduction in taxes and fees on rental projects and as-of-right, or adequate zoning in key areas such as transit corridors.

This isn’t the last rental project for First Avenue. Morelli said he is eyeing to bring 250-rental units to the market once again.

“Yes, we are developers, but we also build homes,” Morelli added. “Developer is the wrong word, we build homes, we are home builders.”