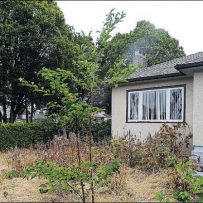 Vancouver, suffering from a near-zero supply of homes available for rent, plans to slap investors sitting on vacant properties with a new tax in an effort to make housing more accessible in Canada’s most-expensive property market.

The levy, which would start in January, may be as high as 2 percent of the property’s assessed value, Kathleen Llewellyn-Thomas, the city’s general manager of community services, told reporters Wednesday. That would mean a minimum C$20,000 ($15,000) annual payment for the typical C$1 million-plus detached home in Vancouver based on July 2015 assessment data, the most recent available.

“Vancouver is in a rental housing crisis,” said Mayor Gregor Robertson, whose announcement follows a separate measure by the province in July to impose a 15 percent tax on foreign buyers. “Dangerously low vacancy rates across the city are near zero.”

While the city, ranked the world’s third-most-livable, has drawn attention for its sky-high purchase prices fomented by global money flows, the rental market has been just as contentious locally. Vacancies can get scooped up within hours, while bidding wars drive up the cost of leases. Public scrutiny has focused on absentee landlords, particularly from overseas, who are accused of sitting on investment properties where windows remain dark throughout the year.

Robertson estimated that more than 10,000 homes are empty and an additional 10,000 are “under-utilized.” The tax aims to get those properties into the rental supply so that the vacancy rate rises to about 3 to 5 percent from near zero today, he said. The city expects to raise about C$2 million from the tax in the first year.

A trickier issue facing the city is defining what constitutes an empty house.

A city-sponsored study in 2014 used electricity-usage data to determine that about 5 percent of homes in Vancouver were uninhabited over 12-month periods. Robertson said the new tax will use a different approach to separate secondary properties held as investments from principal residences in use by owners, tenants or family members.

Homeowners will have to self-declare their type of property. The city plans to conduct random audits to check those declarations against driver’s license addresses, tax bills and other documentation, Llewellyn-Thomas said. Penalties for false declarations are still to be determined but will be higher than just opting to pay the tax, she said.

Vancouver seeks to enact the rules at the beginning of the new tax year, meaning those affected will pay the levy in early 2018. Approval from the city council, which will vote on the measure in the coming months, is expected.

And the city isn’t done yet.

Robertson has directed staff to ready steps by this fall to regulate short-term rentals, including Airbnb Inc., which the city believes is withholding more than 5,000 properties from the housing market.