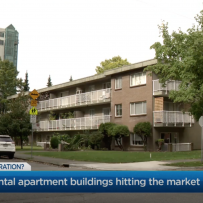 If you’ve ever thought about buying an apartment building in Metro Vancouver, you’re currently spoiled for choice.

A surge of listings has hit the market in recent months, with one commercial real estate group listing 18 multi-unit properties worth nearly a quarter of a billion dollars.

Mark Goodman of Goodman Commercial,  the company listing those properties, says government policies are squeezing some owners, and actually hurting the rental market.

“The mom and pop owners, many of them emigrated to Vancouver in the 60s, they don’t have large cash reserves. And many are unable to keep up with the repairs and maintenance,” he said.

The BC NDP government reduced the maximum allowable annual rent increase last year to match the rate of inflation. Previously, owners had been able to increase rent by inflation plus two per cent each year.

“It’s actually hurting the industry because investors don’t want to buy, rejuvenate these old inefficient buildings, which are often dangerous. They’re not up to code, there’s mould issues, there’s water ingress issues, the roof is falling apart and they have no funds,” he said.

LandlordBC CEO David Hutniak said owners are caught in a catch-22. In cities like Vancouver, which have a rental replacement policy in place, they can’t tear down rentals and build condos, but their property values — and taxes — don’t reflect that.

“You can’t redevelop it, but you’re getting assessed on the basis of highest and best use. There really is an element of unfairness there,” he said.

Compounding that problem is the slow approval time for new projects in the city, with some projects taking four to six years to get off the drawing board.

Hutniak argues that if the city wants to truly address the rental crisis it needs to get serious about opening the floodgates on supply.

“The reason we have a rental housing crisis is because we have a persistently low rental vacancy rate,” he said.

“The real solution to this is lets build a ton of new, secure, purpose built-rental housing. This is not rocket science.”

There is no question the demand is real. A report released by RBC this week found that the city is adding an estimated 22,200 renter households every year.

The report found the city is beginning to make strides in adding new rental stock, but that much of it remains unfriendly to families.

Vancouver Non-Partisan Association (NPA) Coun. Sarah Kirby-Yung said she’s frustrated with that trend, saying the city needs to “say yes when they come down the pipe.”

“We don’t need more condos. We need purpose-built, safe, secure rental units for people. But if we don’t say yes to supply and get more going in the market, we’re not going to help address affordability,” she said.

But COPE Coun. Jean Swanson — one of the councillors who has regularly voted against rental projects — couched her opposition to market rentals in the language of affordability.

“We have to be really careful we preserve the existing affordable rental stock we have,” she said.

“We have to be really clear that we don’t demolish what we have to replace it with expensive rental stock.”

The trend, however, hasn’t been all negative. Earlier this month Vancouver approved a new 35-unit rental development near Commercial Drive and Grant Street after a contentious debate.

TO WATCH VIDEO COVERAGE FROM GLOBAL NEWS, GO TO: https://globalnews.ca/news/5960359/vancouver-rental-sell-off/beta/?utm_expid=.kz0UD5JkQOCo6yMqxGqECg.1&utm_referrer=https%3A%2F%2Fwww.google.com%2F