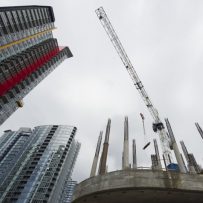 Social and economic forces increasingly are making it fashionable to rent. But Vancouver-area developers aspiring to respond to demand are facing tougher constraints than anywhere else in Canada.

Despite a low vacancy rate and investor interest, builders in Metro Vancouver are thwarted by a “chronic shortage of sites, municipal bureaucratic barriers and the cost of land,” reports David Goodman, a prominent Vancouver realtor specializing in multi-family real estate.

“We are in a mess, and it will have serious social and economic implications.”

Goodman says that “Toronto, the Prairies and even Eastern Canada are witnessing burgeoning new purpose-built markets” with new buildings popping up everywhere.

Notwithstanding the far more challenging building conditions in Vancouver, Mayor Gregor Robertson is touting a target of 4,000 new rental units over the next four years as part of a plan to make the city more affordable.

The city’s website states: “Vancouver has the tightest rental market … in Canada,” with an average vacancy rate of 0.9 per cent during the past three years.

“The need for suitable housing choices for low- and moderate-income households has grown significantly.”

The vacancy rate, at present, is down to a “mind-blowing 0.5 per cent,” reports Goodman.

Planning director Brian Jackson notes that fully half of Metro Vancouver’s rental units are in Vancouver, where half the population or more rents.

He says the city’s new Affordable Housing Agency will reports to city council next year on how to further encourage rental construction.

Goodman scoffs at the city’s reassurances. He says high land values, and construction costs as much as 30 per cent more than in Toronto, as well as a shortage of suitable development sites, combine with obstructionist city policies to make creation of new rental housing an uphill battle.

And so, “1,500 inefficient older rental buildings” are occupying 750 acres of land that cannot be touched.

Whatever the hurdles, many agree renting is becoming an evermore popular option as the price spread between buying and renting widens.

Certainly, condominium units — of which, in Vancouver, 40 per cent are rented — are growing increasingly pricey.

The typical price of a condo unit on Vancouver’s west side is nearly $500,000, $314,000 on the east side, with both categories up more than four per cent in the past year. Another factor — millennials, aged 25 to 34 — are more likely to rent than boomers, with many seeking a downtown lifestyle and forgoing a car.

Indeed, CIBC numbers reveal home ownership among Canadians aged 25 to 34 has declined, from 55 per cent in 2012 to 50 per cent today.

Noting that vacancy and interest rates are low and municipalities are wanting more rentals, Goodman observes: “After a 40-year hiatus, our industry is finally witnessing a rare convergence of factors allowing for … financing and construction of new market rentals across Canada.”

He just wishes conditions were as good in Vancouver for the development of rental property as in the rest of the country.