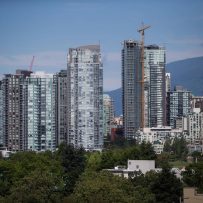 Home sales slumped 9 per cent last month in the Vancouver region as transactions for detached properties sagged while prices remain high, with the full impact yet to be felt of new residential taxes levied by the B.C. government.

In its budget delivered on Feb. 20, the NDP minority government announced a variety of measures designed to reduce home prices, including what it calls a speculation tax imposed on out-of-province residents. The NDP also increased and expanded the province’s foreign-buyers tax beyond Metro Vancouver, a region originally targeted by the former BC Liberal government in August, 2016.

While industry experts caution against reading too much into February’s statistics, they say the cumulative impact of the tax measures will be seen in the months ahead as the market enters the traditionally busy spring season for real estate.

February sales of detached houses, condos and townhouses totalled 2,207 in Greater Vancouver, compared with 2,424 transactions for the same month in 2017.

Sales volume for detached houses saw the biggest decline as 621 properties changed hands last month, down 16.6 per cent from a year earlier. Over the past year, condo sales fell 7.1 per cent to 1,185 deals in February, while townhome sales slipped 0.7 per cent to 401 transactions in the Vancouver area.

Last month’s sales of detached properties rang in 39.4 per cent lower than the 10-year average for the month of February.

Cameron Muir, chief economist at the B.C. Real Estate Association, said what the province calls a speculation tax is more accurately described as largely a vacancy tax that will scare Albertans away from buying recreational property in major swaths of B.C. and spur others to sell their existing secondary homes and look at places such as Palm Springs, Calif.

“There will be substitutes outside of Canada that will be considered,” Mr. Muir said. “I would argue that if you’re buying a B.C. place in Nanaimo or Parksville as an Albertan, you might be planning on living there full time when you retire, but that isn’t the same as purchasing in Palm Springs.”

Real estate economist Tom Davidoff of the University of British Columbia’s Sauder School of Business said he supports the NDP’s move against Albertans and residents from other provinces, though he acknowledges there will be hardship cases that arise, such as seniors on fixed incomes. He suggested that in those instances, the NDP could encourage Alberta seniors to defer taxes owed until their B.C. property is eventually sold.

“It’s outrageous that a grandma from Alberta will have to pay the tax. But it’s also outrageous that many people can’t afford to work and live in Vancouver. I don’t mean to sound heartless, but you can’t make an omelette without breaking eggs,” Prof. Davidoff said.

A notable tax measure that industry experts say will likely cool off the higher-end housing market is an increase in the property transfer tax. In 1987, the Social Credit government at the time introduced the tax: On the initial $200,000 of the purchase price, the home buyer forked over 1 per cent and then paid a 2-per-cent tax rate on the amount above $200,000.

That formula remained untouched until February, 2016, when the BC Liberals unveiled a new calculation in what they portrayed as higher taxes on luxury properties. In its budget last month, the BC NDP raised the rates for what it terms “high-value” homes.

Last month’s B.C. budget also includes an increase to the province’s school tax, affecting the portion of the value of a property assessed above $3-million.