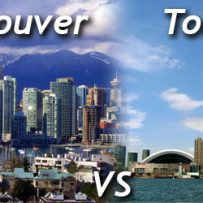 The cost of carrying a detached home in Vancouver is now more than a typical household makes in Canada’s most expensive housing market, according to a new survey.

Royal Bank of Canada’s affordability calculator for the fourth quarter of 2015 found that households with median income must now pay 109 per cent of pre-tax earnings to buy just an average home in the metro Vancouver area — leaving nothing for food, clothing or other essentials.

Toronto appears to be headed in the same direction, the report says, and RBC now calls both cities “increasingly, dangerously unaffordable” and out of reach for an average household.

Is it time for the average family to abandon the dream of owning a single detached home? Robert Hogue, senior economist with RBC, said that dream ended long ago.

“The family at the middle of the income distribution needs more money than they actually make,” said Hogue. “It’s been unaffordable for some time. It’s just becoming more visible now because it’s (more than 100 per cent).”

Ideally, RBC says only 32 per cent of your pre-tax household income should go towards your home ownership cost — which include mortgage payments, utilities and property taxes — and is based on a 25-year amortization and 25 per cent down payment.

Just to buy the average residential property in the metro Vancouver area, which includes condominiums, a household would need $160,000 in qualifying income, or $215,000 for a detached home, which RBC said is now on average $1.2 million in the metro area.

The answer, says the RBC economist, is condominiums. “That’s what is there for those being shut out of the detached homes,” Hogue said.

In Toronto, based on median income in the region, the average single detached home would chew up 71 per cent of pre-tax household income.

“It’s not the same league (as Vancouver), but within its own history, that’s a lot for Toronto,” said Hogue. “It’s no doubt putting quite a bit of stress for those contemplating buying that segment.”

It’s mainly a two-city story across the country. Smaller centres like Halifax, still considered expensive by east coast standards, only requires 31 per cent of pre-tax income to buy the average single detached home, based on median income.

Hogue said home ownership is not something all Canadians expect to afford.

“Only a certain percentage of the population can be owners,” he said.

In Vancouver, Elton Ash, region executive vice-president of Re/Max of Western Canada said home ownership in that part of the country means some tough decisions.

“From the first-time home buyer point of view, it is exceptionally difficult to get into the market. What they are doing is going out away from Vancouver into the Fraser Valley or the Sunshine Coast and they are commuting,” Ash said, adding that’s been the Toronto story for years. “First-time home buyers can look at condos too, but that’s like 650 square feet (in area) and that’s like living in a hotel room. People have to start measuring their lifestyle choices.”