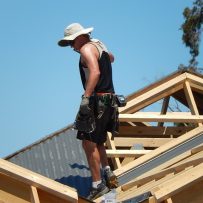 After back-to-back monthly declines in July and August, US housing starts rose in September.

Privately-owned housing starts last month were up 6.5 percent over the revised estimate for August, according to data from the US Census Bureau released yesterday.

This translates to a seasonally adjusted annual rate (SAAR) of 1,206,000 housing units in September. August’s revised estimate was for 1,132,000 starts.

The SAAR controls for seasonal highs and lows and represents what the annual number of housing starts would be if a given month’s pace for starts continued for 12 months.

September 2015’s SAAR was up 17.5 percent over the rate seen at the same time last year.

Meanwhile, the figure for multi-family buildings comprised of five or more units was 454,000, up 17 percent from August and 28.6 percent from a year ago.

The Census Bureau did not include figures for multi-family dwellings with less than five units “because tests for identifiable and stable seasonality do not meet reliability standards.”

In a statement also released yesterday, RBC Economics projected US housing starts to increase to a SAAR of 1,230,000 in Q4 of this year.

“We continue to expect that strengthening housing demand will spur homebuilders to ramp up construction of new homes,” the statement from the bank read.

Construction wound down on more homes in September than in the previous month as well. The SAAR for housing completions was 1,028,000 units, or a 7.5 percent jump over the revised figure for August, which was 956,000 units.

In September, 643,000 of these units were single-family homes, shy of August’s revised performance estimate by 1.8 percent. But buildings with five or more units picked up the slack: September’s SAAR of 378,000 for this housing type was 29 percent higher than August’s.

However, US municipalities granted fewer building permits — which are a good indicator of future activity because they give an idea of how many homes have been approved for construction — in September than in August.

The SAAR of building permits was 1,103,000 in September, a 5 percent decline from August, when the SAAR was 1,161,000. September’s building-permit activity was still 4.7 percent higher than it was during the same month last year.

The number of permits issued for single-family dwellings and buildings with five or more units both declined month-over-month in September. The SAAR for single-family authorizations was 697,000, down 0.3 percent from September, while permits for five-unit-or-more buildings dropped 14.6 percent to 369,000.