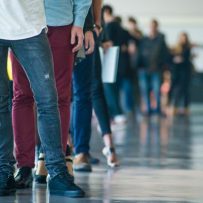 After stellar growth over the past few years, Canada’s job market is showing signs of slowing down ― even as wage growth is accelerating.

The country posted a decline of 24,200 jobs in July, according to Statistics Canada, pushing the unemployment rate up to 5.7 per cent ― still a very low rate by historic standards.

The decline came as a surprise to experts, who had been expecting job gains of around 12,000 to 14,000. This marks the third consecutive month that Canada’s economy has failed to produce any meaningful amount of new jobs.

And the details in the latest report are not pretty. The private sector lost nearly 70,000 jobs in July, offset by some 17,500 new public sector jobs. The number of people who identify as “self-employed” ― often a euphemism for being unemployed ― jumped by 27,700.

Employment fell among young people aged 15 to 24 and for women in the core working ages of 25 to 54, while rising among men in that age group, Statistics Canada said.

Employment fell in every province except Quebec, P.E.I. and Newfoundland and Labrador. Alberta led the way with 14,300 job losses, followed by Ontario (down 10,700 jobs) and British Columbia (down 4,800 jobs).

Wages were one bright spot in the report. After several years of strong job growth leading to a historically severe labour shortage, wages are accelerating.

StatCan reported the average hourly wage rose by 4.5 per cent, year-on-year, in July, up from 3.6 per cent the month before. That’s the fastest pace of growth since early 2009, according to TD Bank senior economist Brian DePratto.

DePratto wondered whether the pause in hiring is simply due to employers not being able to find workers. It “may be reflective of tight labour conditions,” DePratto suggested in a client note.

Janzen noted that Canada has 353,000 more jobs than it did a year ago.

“The July employment dip was softer than market expectations – but is still not really surprising. Outsized growth in prior months has for some time looked out-of-step with other measures of economic growth, like GDP,” Janzen wrote.