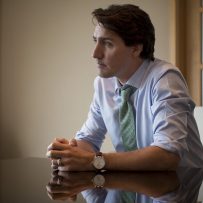 The U.S. labor market just sneezed, so Canada might catch a cold.

Friday’s non-farm payrolls report, which came in at its lowest level since 2010, suggests there’s cause for concern that what Canada’s central bank saw as transitory weakness caused by wildfires in Alberta will prove more enduring.

In its May 25 statement, the Bank of Canada cited U.S. employment trends as one of the factors pointing to a return to solid growth for the nation’s most important trading partner. Employment growth of 38,000 jobs for the U.S. in May is 3,000 fewer jobs than Canada added in March, according to the Labor Force Survey.

The central bank argues a sufficient increase in Canadian exports will prompt business to invest more, expediting a re-balancing of growth away from indebted households to more sustainable drivers. Canada’s top two exports are oil and autos, the first of which is tied to global gasoline demand and the latter to U.S. consumers, reinforcing the view that America’s economic engine is also, to a certain extent, Canada’s.

Financial markets reacted immediately to the deterioration in U.S. job growth and the implications for its northern neighbor. The implied odds of a Bank of Canada rate cut by the end of 2016 surging to 30 percent in the aftermath of the report, from 14 percent Thursday. Bank of Canada Governor Stephen Poloz has indicated that it would take a “significant” negative shock to provoke another rate cut.

“In the event that either U.S. growth or exports disappoint further, it will fall to a stretched consumer and housing market to sustain momentum,” said David Tulk, Head of Global Macro Strategy at TD Securities in Toronto.

Given the U.S. focus of the weakness of Friday’s data, the Canadian dollar advanced sharply against the greenback. 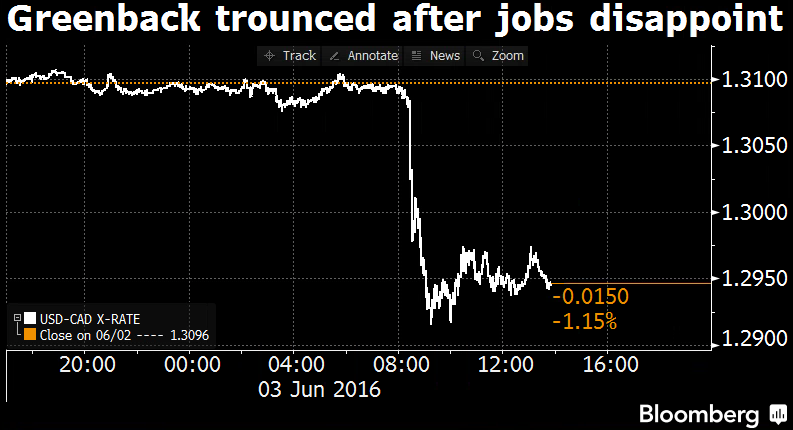 A stronger loonie makes exports less attractive to foreigners and cheaper for Canadians to import goods from abroad. As such, these foreign exchange fluctuations are supportive of the type of trade report Canada received in April, in which import volumes rose by more than export shipments — a negative for real economic growth.

“The Bank of Canada should be more cautious with respect to what is happening on the trade side of the picture than it has let on to date and more cautious toward the currency in light of reduced probabilities that the Fed will provide an assist to Canada through the dollar,” Derek Holt, Scotiabank Vice-President of Economics, wrote in a note to clients.

This backdrop warrants, at minimum, a “long pause” by Poloz, said Holt.

While it’s far from his base case, CIBC World Markets Chief Economist Avery Shenfeld acknowledged that there is a risk the yawning gap between solid payroll growth and weak economic growth for the U.S. in the first quarter could be resolved by anemic job growth rather than an uptick in output growth.

“The clouds on the U.S. outlook after today’s data are therefore a reason to worry about an extension of Canadian Q2 softness into the second half,” he cautioned. “But the clouds are not yet dark enough to hit the panic button.”