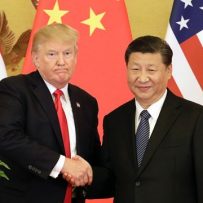 The Trump administration formally labeled China a currency manipulator, further escalating its trade war with Beijing after the country’s central bank allowed the yuan to fall in retaliation for new U.S. tariffs.

While the Treasury Department’s determination is largely symbolic — the potential penalties are less punitive than the steps Trump has already taken against China — it underscores how rapidly the relationship between the world’s two largest economies is deteriorating. The move roiled markets, with S&P 500 Index futures sliding almost two per cent at one point, though turmoil eased when China set a stronger-than-expected level for the yuan in its daily fixing.

China’s currency broke the 7 per dollar level on Monday for the first time since 2008, unleashing tumult across global markets. The S&P 500 Index saw its biggest drop of the year, and havens including Treasuries and the yen soared. Equities were down again Tuesday, though the yuan rose offshore and the yen retreated.

The U.S.’s manipulator announcement followed a declaration by China’s central bank chief, Yi Gang, that his nation wouldn’t use the yuan as a tool to deal with trade disputes. “I am fully confident that the yuan will remain a strong currency in spite of recent fluctuations amid external uncertainties,” Yi said in a statement. President Donald Trump called the yuan’s plunge below the symbolic level of 7 per dollar “currency manipulation” in a tweet.

Under the designation, Treasury Secretary Steven Mnuchin “will engage with the International Monetary Fund to eliminate the unfair competitive advantage created by China’s latest actions,” the department said in a statement.

It’s the first time that the U.S. labeled a country a manipulator since the 1990s, when China was also the target. Officially, it requires the U.S. government to seek negotiations with the government accused of manipulation. But officials in Beijing and Washington have already been engaged in trade talks for more than a year.

If there is no progress a year after the designation, China could face possible sanctions including its firms being prohibited from competition for U.S. government contracts and excluded from getting financing from an American government agency for development projects. A 2016 analysis showedChinese firms had marginal contracts over the previous few years and no such development financing outstanding.

What could be more meaningful is that the designation increases the potential for outright currency intervention by the U.S. and further tariffs from the Commerce Department, according to Daniel Hui, global FX strategist at JPMorgan Chase & Co. in New York, who noted those outcomes still remain unlikely.

The Trump administration in May moved to let U.S.-based companies seek tariffs on products from countries found by Treasury to be engaging in competitive devaluation of their currencies.

If the animosity between Washington and Beijing continues, U.S. stocks could slide another eight per cent, said Hari Hariharan, chief executive officer of New York-based NWI Management. “Everything will get clobbered,” Hariharan said. “The more the U.S. does, the more upset the Chinese get.”

The two countries escalated their trade war after Mnuchin and U.S. Trade Representative Robert Lighthizer returned from meetings with counterparts in Shanghai last week without progress toward a deal to resolve American complaints about China’s economic practices. Trump ordered 10 per cent tariffs on about US$300 billion in Chinese imports to begin Sept. 1, barring a breakthrough in negotiations.

China then retaliated on Monday, allowing the yuan to fall through 7 and instructing state firms to cease purchases of U.S. farm goods.

While Trump promised to declare China a currency manipulator during his presidential campaign in 2016, Treasury had so far declined to take the step. The Treasury typically makes its currency-policy determinations in semiannual reports to Congress, but Monday’s action came outside that process. The next report is expected in coming months.

More than a decade ago, the U.S. pressed the IMF on China’s currency practices, at a time when it ran much larger current-account surpluses than is true today, according to Mark Sobel, who worked at the Treasury’s international affairs unit for 40 years.

“We urged the Fund to conduct ad-hoc consultations with China, which would have if nothing else stigmatized China somewhat,” Sobel said. “The Fund didn’t do so.”

Eswar Prasad, an economist at Cornell University who worked in the IMF’s China division, said China still doesn’t meet Treasury’s technical criteria for manipulation. Countries are measured for manipulation based on their trade deficits with the U.S., their histories of intervention and their current-account balances.

“Treasury has made what seems like an arbitrary determination of currency manipulation since China hardly meets all of the relevant criteria and despite the dilution of those criteria over time,” Prasad said.

The Treasury statement cited the PBOC’s own statement on Monday as evidence that China was controlling its exchange rate. Stating that it would take measures to stabilize market expectations, and alluding to tools it had developed, was “an open acknowledgment by the PBOC that it has extensive experience manipulating its currency and remains prepared to do so on an ongoing basis,” the U.S. Treasury said.

Mnuchin said in June that China was intervening in currency markets to prop up the yuan, and warned it could be designated a manipulator if it stopped. “It’s not coincidental in my mind that the currency has moved from approximately 6.30 to 6.90” to the dollar, he said after a Group of 20 meeting in Fukuoka, Japan.

China watchers say the U.S. move would make compromise more difficult for the Chinese side.

“The timing couldn’t be worse,” said Bonnie Glaser, director of the China Power Project at the Center for Strategic and International Studies in Washington. “The potential for compromise has past. Both sides are digging in and both leaders are first and foremost concerned about their domestic audiences. Politics is in the lead.”