U.S. already in recession, Fed will cut rates back to zero: Rosenberg 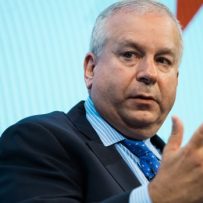 The world’s biggest economy is already in a recession, according to prominent Canadian economist David Rosenberg, who says the U.S. Federal Reserve will begin cutting interest rates all the way back to zero starting this summer.

Rosenberg, chief economist and strategist at Gluskin Sheff + Associates, told BNN Bloomberg in an interview airing Friday that back-to-back quarters of negative gross domestic product (GDP) is not the only measure of a recession.

“In fact, you don’t even need GDP to go down in a recession – normally it does,” Rosenberg said in a television interview with BNN Bloomberg Commentator Andrew McCreath.

“The bottom line is the NBER (National Bureau of Economic Research) are arbiters of a recession, and we don’t usually even know about the recession until a year after it starts, because that’s when the NBER tells us.”

Rosenberg has been calling for a recession in the U.S. in 2019 since late last year.

“If you look at household employment, you look at real business sales, you take a look at industrial production, which, by the way, is in a recession, and take a look at organic real income in the U.S. – [it] peaked in December,” said Rosenberg.

“So, I would actually say that the surprise is that the recession has actually already started ahead of what GDP is doing.”

The Federal Reserve said on Friday that industrial production rose 0.4 per cent in May – marking its first gain this year. It lost 0.4 per cent in April. Meanwhile, the U.S. economy expanded at an annualized rate of 3.2 per cent in the first quarter.

Trading in the overnight swaps market pricing in three interest rate cuts by the Fed this year is probably appropriate, according to Rosenberg.

“They never cut rates less than three times. If I’m right that economy is actually in a recessionary state, and will probably more further move into that state in the next year – rates at the front end of that curve – the overnight rate is going to zero,” said Rosenberg.

The overnight lending rate in the U.S. is currently at 2.5 per cent.

In terms of what this means for Canada, Rosenberg said the country’s central bank will lag the Fed like they did in the last tightening cycle.

“Policy in Canada… [is a] price taker monetary policy, we’re not a price maker,” said Rosenberg. “So, we will lag the Fed, but we will follow the Fed this cycle basis point for basis point.”

He added that any negative interest rates spreads resulting from central bank moves that spark a Canadian dollar rally should be seen as an opportunity to sell the loonie.

“The global economy is going to cave with the U.S. Do you want to own commodity-related currencies in a global economic downturn?” Rosenberg said. “The answer is no, and that includes the Canadian dollar.”