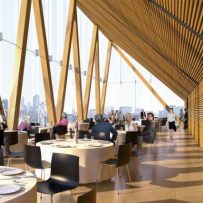 The University of Toronto is planning to build the tallest mass timber and concrete hybrid building in North America on Devonshire Place, just south of Bloor. The new academic tower would rise 14 storeys from the north end of the Goldring Centre for High Performance Sport, and would house space for Rotman Executive Programs, the Munk School of Global Affairs, the Faculty of Arts & Science’s Master in Mathematical Finance program, and the Faculty of Kinesiology & Physical Education. 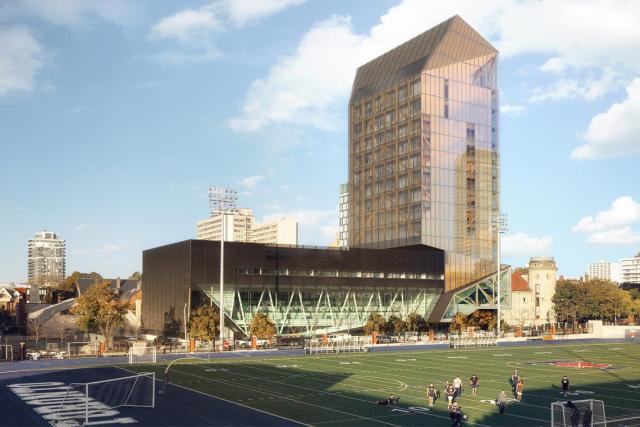 Patkau Architects and MacLennan Jaunkalns Miller Architects (MJMA)—the same firms responsible for the recently built Goldring Centre—have designed the high-rise addition, with Blackwell Structural Engineers also returning for the new build. The project’s design phase is ongoing, and site-specific zoning changes will be required to increase the height allowance for tall wood buildings, currently capped at six storeys by the Ontario Building Code. If all goes according to plan, construction could begin as early as the end of 2019.

“There are a lot of compelling arguments for the use of wood,” reads a statement from Gilbert Delgado, the U of T’s chief of University Planning, Design and Construction, in reference to the low carbon footprint, fire safety, and faster construction time offered with the use of cross-laminated timber (CLT), a form of wood with improved strength and fire resistance over standard timber. “We’re talking about beams and columns that are much larger, much thicker, that are much more difficult to ignite,” added Delgado. The use of CLT will also allow many building components to be manufactured offsite, allowing easy assembly once shipped to the build site. 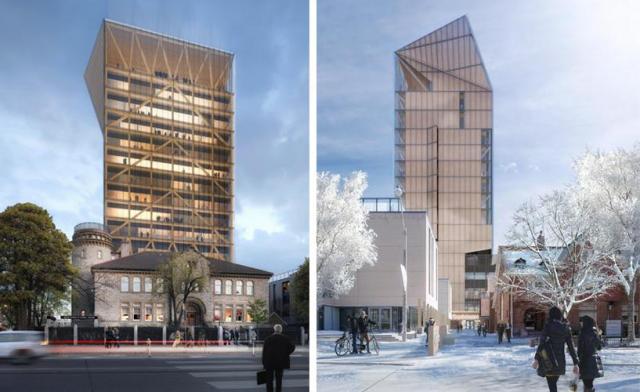 The existing Goldring Centre was designed to support this addition, with MJMA’s Ted Watson saying “there will be no need to dig deeper in order to build the taller structure. As part of that project, we developed a structural base, a foundation, to put the future tower on top of”. The tower was originally slated to be built using steel, though the introduction of new government incentives and research by members of the Faculty of Forestry led to the decision to switch to timber.

This news adds to the ongoing surge of new tall wood buildings being proposed around the region, with plans already in the works for a wood-frame educational building at George Brown College‘s Waterfront Campus called The Arbour, and a proposed mid-rise office building at 57 Wade Avenue. Recognizing the benefits of wood construction, the provincial and federal governments are both providing partial funding for new buildings using CLT, including the ones mentioned above. The five-storey 80 Atlantic Avenue, an office building designed by Quadrangle for Hullmark, is another timber building under construction now. 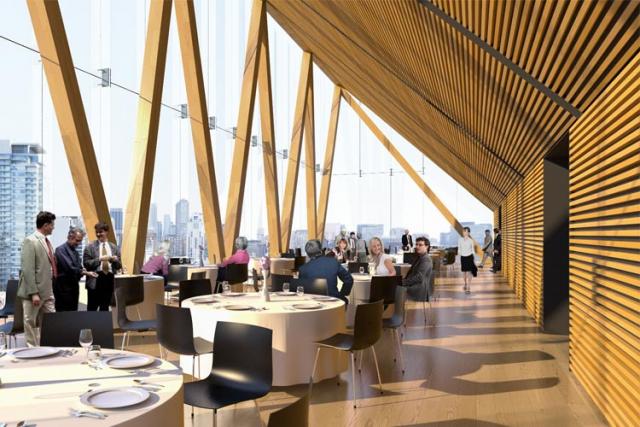 We will be sure to return with updates as additional information becomes available. In the meantime, you can review project details by visiting our database file, linked below. Want to get involved in the discussion? Check out the associated Forum thread, or leave a comment in the field provided at the bottom of this page.