Two ends of a boom town 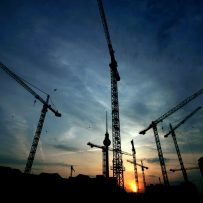 Toronto’s once-derelict main street is in the midst of the most remarkable transformation in its history, with more than 20,000 condos that will house more than 30,000 people — the population of Orillia — under construction or in the planning stages.

And that’s just in a seven-kilometre stretch from Lake Ontario to the hotbed of midtown condo construction at Yonge St. and Eglinton Ave.

The implications are massive. Whole blocks could be revived or razed, more people will cram the subway and sidewalks, and there will be even more urban kids needing schools.

SUSAN PIGG/ TORONTO STAR
The corner of Yonge and Isabella is among one of many blocks along Yonge St. slated for condo towers over the next few years.

And there are thousands more units yet to come or planned for the areas immediately east and west of Yonge.

“I think it’s going to be incredible in the next 10 years when it’s fully built out,” said Riz Dhanji, vice-president of marketing and sales for Canderel, developer of the massive Aura building at Gerrard St. and the surrounding College Park projects. 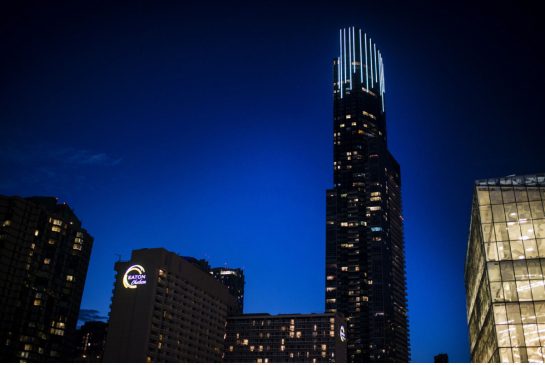 BRIAN B. BETTENCOURT / TORONTO STAR
A view of the Aura Condo building in downtown Toronto on the evening of August 11, 2015. The building features a unique light installation that shines throughout the evening.

“It’s going to make Yonge St. a really exciting place, which it needs to be.”

City planners, politicians and business improvement groups are all grappling with the explosive changes coming — the need to protect heritage buildings while preserving Yonge’s unique character, and ensure it’s not simply lined with tall buildings and big-box stores. 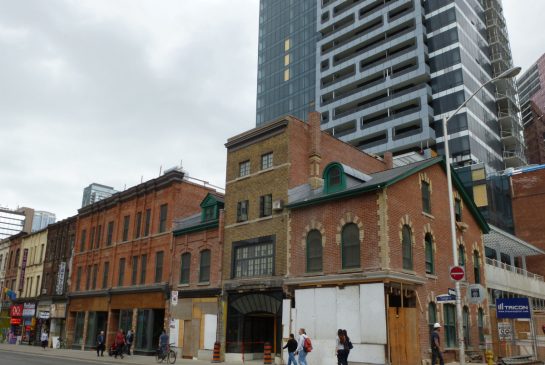 SUSAN PIGG/ TORONTO STAR
Yonge and St. Joseph St., where MOD Developers has opted to build its condo towers atop a historic warehouse just behind a historic block of Yonge st. and have specialized heritage architects meticulously restore/build the stores in front of the condo tower.

There’s even talk of the need to reduce traffic to two lanes and widen sidewalks as Yonge St. turns into Young St.

“This is a huge, remarkable, quite wonderful transformation,” said former city planner Ken Greenberg, whose first job at city hall in the late 1970s was coming up with a plan to remake the main drag which, in the wake of the murder of shoeshine boy Emanuel Jaques, was in its darkest days.

“The biggest challenge is going to be making sure everything that happens at street level is exceptional.” 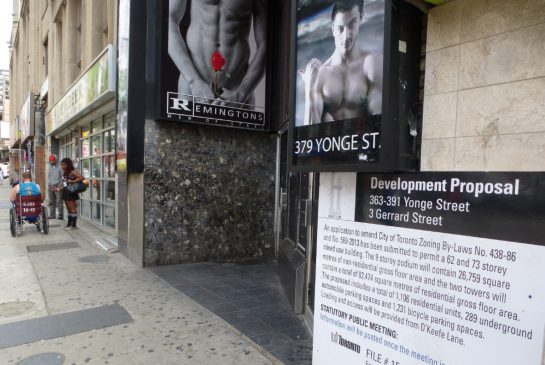 SUSAN PIGG/ TORONTO STAR
363 Yonge St. is one of the proposed condo developments along the busy stretch of Yonge St. from One Yonge to Eglinton Ave.

Few neighbourhoods illustrate the challenges of such rapid change as the ones at Yonge and Eglinton and at the foot of Yonge St.

MARCUS OLENIUK/ TORONTO STAR
Construction at the corner of Yonge and Eglinton.

On paper, at least, this mixed-use community was ideally suited to be designated an “urban growth centre” under the province’s decade-old Places to Grow legislation and targeted for higher density development.

But the applications from developers to build more and more — and at a size never anticipated on streets once lined mainly with houses — has area Councillor Josh Matlow so concerned that he wants a moratorium on any new highrise developments until the city can get a better grip on services needed to handle the growth.

Some 22 projects with 8,868 condo units are proposed or under construction just in the heart of this midtown area, according to Paul Farish, a senior city planner. Expand the circle out towards Bayview and Davisville Aves. and the number of potential condos jumps to 12,296 units in almost 50 projects.

While parts of the downtown are seeing similar pressure from condo redevelopment, that pressure is spread over 2,120 hectares, says Farish. Yonge-Eglinton is just 61 hectares.

“Dozens of applications have come in recently and I expect more to come,” said Matlow, whose Ward 22 office regularly fields calls from area residents frustrated by blocked streets and constant dust and noise that continues well into the evening, despite a bylaw that prohibits loud work past 7 p.m.

Planners are becoming especially concerned by development pressure to tear down old office towers and turn them into yet more condos, contrary to the city’s stated goal to maintain a live-and-work community at Yonge-Eglinton.

“The plan was to have tall buildings near the intersection, and I understand that. But now we’re seeing these taller buildings popping up in neighbourhoods that used to be sleepy little streets for single-family dwellings,” said Matlow.

“Transit, parks and other infrastructure haven’t kept up with the pace of development. Many of our schools are at or over capacity. It’s unfair that Yonge and Eglinton continues to see more and more condos being built while residents who now live here aren’t getting the services they deserve.”

Long-time resident and community activist Terry Mills fears far worse is yet to come. The member of the Federation of North Toronto Residents’ Associations has examined virtually every street with potential for redevelopment and believes as many as 80 more towers, with some 45,000 residents, could be built in the neighbourhood over the next 15 to 20 years, doubling the population.

The city has set some goals, through a study called Midtown in Focus, for wider sidewalks and public squares as part of new developments. Planners are now in the midst of looking at population growth — now and in the future — and what kind of schools and other community services will be needed to meet growing demand.

The audacious minicity being proposed for the foot of Yonge St. by Vancouver-based developer Pinnacle International is the condo project to watch in the coming year.

The public discussion will be about how many towers — and how high — Pinnacle can build on the 2.7-hectare site at Toronto’s waterfront, on lands surrounding the Toronto Star building.

Under its latest proposal, which is still being reworked, Pinnacle hopes to build five residential and office towers around the Star’s 25-storey tower — the tallest of them a 95-storey condo building abutting the Gardiner Expressway.

But the most interesting debate has been going on behind the scenes for more than two years now. It’s between Pinnacle, the City of Toronto and their planning partner, Waterfront Toronto. The three organizations have been trying to hammer out a deal for One Yonge that will create a bigger master plan for northerly Queens Quay over to Jarvis St. and won’t be overruled by the Ontario Municipal Board (OMB.)

“This is a great address. It’s probably the most recognized street, even for people outside Toronto,” said Pinnacle’s vice-president of sales, Anson Kwok. “We’re here to build a great community.”

The architect of the One Yonge site, the well-respected David Pontarini, says he’s aiming to create “a landmark” at One Yonge and that 95 storeys is in keeping with nearby towers in the core, such as the 92-storey Frank Gehry/David Mirvish project proposed for King St. W.

“There are certainly arguments for having tall buildings on Yonge St. We’ve been working hard with Pinnacle because this is a significant site and there’s no question it can accommodate a lot of development,” said senior city planner Gregg Lintern, director of community planning for Toronto and East York District.

“But how much and how it’s done needs to be looked at in a bigger context,” Lintern said. “How much are these towers going to enclose the public realm; will there be views (of the waterfront) through these buildings? The idea is to build complete communities and, as far as I’m concerned, the OMB should be equally concerned about that.”

In time, some 15,000 people could be living and another 13,000 working at the foot of Yonge and along easterly Queens Quay to Jarvis St., a nine-hectare area called the Lower Yonge Precinct.

That includes the 4.5-hectare LCBO site — the province is down to a shortlist of three potential buyers for that sprawling site — and the Loblaws at Jarvis, which is expected to be redeveloped in time.

“Yonge St. is our most important street. This is where it all begins,” said retired city planner Paul Bedford, an occasional member of a joint city and Waterfront Toronto design panel that held a public review of the Pinnacle plan in mid-September.

“But it’s important to set the table before you cook the dinner.” 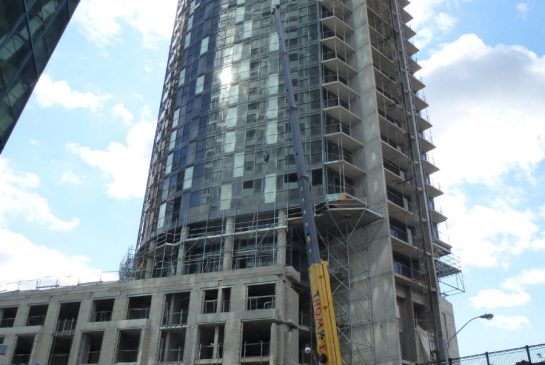 SUSAN PIGG/ TORONTO STAR
Backstage condo development at Yonge and Esplanade which is still under construction and butts up against the Union Station Tracks immediately south of L Tower.

City planners are scrambling to do that now with what’s called the Lower Yonge Precinct plan, laying out a vision for what will be allowed, and how it will all tie together, on those three critical waterfront area sites.

But there is a problem: Pinnacle has already appealed to the OMB to review its proposal. A hearing is set for December. Should the OMB decide to go ahead with a full hearing on Pinnacle’s plan, the city’s precinct plan could effectively be moot.

And that would have major implications for what the city hopes to achieve on the bigger LCBO site.

So far, planners say, Pinnacle has shown that it’s serious about negotiating, rather than bulldozing its way through the OMB, although how much longer it’s prepared to keep negotiating won’t be clear until the December hearing.

Bedford holds out hope that even if an appeal moves ahead, it will be a replay of what happened at the OMB in 1999 on an application to build a Home Depot on Cherry St.

The OMB sided with city planners that the application be rejected until the city could complete its precinct plan for the area.