Trump’s trickle-down tax plan: What it means to the rich, the poor, and Canada 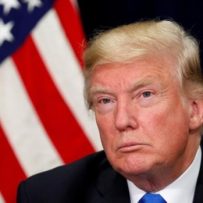 WASHINGTON — Donald Trump promised to govern for America’s forgotten men and women; yet he promoted a tax reform plan on Wednesday that independent analysts say does the exact opposite, transferring tens of billions of dollars in wealth up the income ladder.

The president claimed at a rally in Missouri that the tax plan would be great for the little guy, while clobbering rich guys like him: “It’s gonna cost me a fortune, this thing. Believe me, believe me, this is not good for me.” Analysts are piling on to pummel that analysis.

The plan would immediately hike taxes on nine per cent of lower-income Americans, and within a decade hurt the lower 50 per cent of income earners, according to new analysis by the non-partisan Tax Policy Center.

The congressional budget watchdog joined in. It found the poorest Americans would immediately be worse off, and said things would worsen with time: By 2027, it found the treasury would collect about US$60 billion more annually from people earning under $75,000, while disbursing $20 billion more to the upper classes.

In other words, it would be bad for the deficit; terrible for lower-income Americans; and great for Trump.

A pair of bills before Congress would drastically reduce corporate taxes; either eliminate or weaken the tax on multimillionaire estates; reduce personal income taxes generally; and eliminate Obamacare health provisions.

“When folks find out what’s in this bill there’s going to be a day of reckoning,” Democratic Sen. Bill Nelson told the chamber on Wednesday.

Republicans are advancing different versions of the bill through the House and Senate, and a GOP lawmaker publicly revealed one reason for the urgency: Chris Collins said his wealthy donors have demanded it, and told him not to bother asking for donations again if he can’t get it done.

Republicans say the problems can be addressed with time.

One reason the bills become gradually more punitive for the working classes is the use of a procedural tactic. The U.S. Senate has a rule that allows bills to pass with a simple majority — but only if it doesn’t worsen the long-term deficit.

So to design a bill that might pass with just the support of Republicans, instead of requiring the normal 60 per cent vote in the Senate, the majority party stuffed it with provisions that expire gradually.

Republicans argue that the provisions benefiting the lower classes can be re-introduced later.

One permanent aspect of these bills involves corporate tax cuts, and it’s of particular interest to Canada’s economy. According to analysis from Scotiabank, it would leave Canada and the U.S. with similar corporate tax rates.

The U.S.’s currently high corporate taxes would be reduced to a marginal effective rate of about 21.7 per cent, combining federal and state taxes. That’s just a shade higher than Canada’s federal-provincial combined marginal-effective rate of 20 per cent.

That would be a big change; Canadian companies currently enjoy a nearly 15 percentage point effective tax advantage over their U.S. competitors.

“Any … advantage we might have had will be erased,” said Brett House, Scotiabank’s deputy chief economist.

House said that could spur a push in Canada for additional corporate tax cuts.

The chief economist at BMO says there would be a dual effect on Canada.

“Some of it is good news, some not so good news,” Douglas Porter said.

On the one hand, he anticipates a boost in short-term spending and growth, and an increase in the U.S. dollar, all of which could boost Canadian exports. On the other hand, he said Canada could lose its long-term advantage on corporate taxes, compounded by uncertainty on the trade front.

House agreed the bills would have a mixed effect on Canada.

As a general rule of thumb, his bank’s models imply that for every one percentage point increase in U.S. GDP growth rates, Canadian GDP grows an additional 0.5 per cent. However, some critics of the bill have questioned whether much economic growth will be squeezed by cutting taxes, primarily on the wealthy.

More bullish economists have suggested the tax plans could expand the U.S. economy up to 4 per cent over a decade, or 0.4 per cent per year — while other analysts say the growth would be closer to zero.