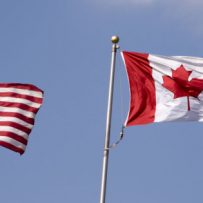 The Trump administration’s tariff threats have the potential to drive companies currently operating in Canada out of the country, the president of a Canadian automotive association said Tuesday.

The United States has already imposed tariffs on the steel and aluminum industries and has threatened to impose a 25 per cent levy on Canadian-made autos.

The tariffs could make Canadian-made products uncompetitive and add $6,000, $10,000 or more to the cost of a vehicle, said David Adams, president of Global Automakers of Canada, at an event sponsored by the Economics Club of Canada.

He said a non-automotive company he knows has decided it can’t expand in the United States from Ottawa, because of the uncertainty, so it’s opening a U.S. office and the same could happen to automotive companies.

“The uncertainty effectively does the job of . . . driving more investment into the United States as the safe harbour,” Adams said.

The Trump administration hasn’t necessarily realized that the its tariffs will also hurt the United States, said MaryScott (Scotty) Greenwood, chief executive of the Canadian American Business Council — pointing to a recent announcement by Harley-Davidson.

A tariff war between the U.S. and many of its trade partners has already prompted the iconic American motorcycle company to move production of motorcycles bound for Europe overseas, blaming European Union tariffs it said would add an estimated $2,200 cost to the average bike. That prompted President Donald Trump — whose own tariffs prompted the EU moves — to accuse Harley of using tariffs as an excuse for moves already planned.

Prime Minister Justin Trudeau has announced Canada will impose $16.6 billion in retaliatory tariffs on U.S. products coming into Canada, which go into effect on Sunday.

But CIBC chief economist Avery Shenfeld said Tuesday the United States is far better equipped than Canada to withstand the use of tariffs as a “sledge hammer” in trade negotiations.

Some Americans will face higher costs on imported goods from Canada but U.S. producers will be at a smaller risk because their home market is so much bigger than ours, Shenfeld said during a panel discussion about NAFTA in Toronto.

“If you are doubting whether or not you can produce that widget for (a car) in Canada and avoid a 25 per cent tariff when you sell that part to the American plant, you’re . . . going to want and see what happens,” he said.

“Canada and Mexico can’t afford to have this cloud of uncertainty, to a much greater extent than the U.S. can.”