Trump says he’s raising tariffs on China after its retaliation 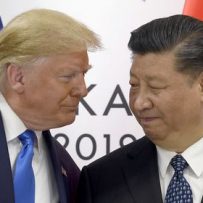 Duties on US$250 billion of imports already in effect will rise to 30% from 25% on Oct. 1, Trump said in a series of tweets Friday after U.S. markets closed. He also said that the remaining US$300 billion in Chinese imports will be taxed at 15% instead of 10% starting Sept. 1.

Friday’s events marked a dramatic escalation in tensions between the U.S. and China after months of failed talks to resolve their trade dispute. It’s unclear whether negotiators will follow through with a plan to meet in Washington next month as relations have continued to sour.

“China should not have put new Tariffs on 75 BILLION DOLLARS of United States product (politically motivated!),” Trump said on Twitter.

Trump’s announcement came after China earlier Friday threatened to impose additional tariffs on US$75 billion in American goods, including soybeans, cars and oil. The president followed that move with a series of angry tweets in which he said he “hereby ordered” American companies to start looking for alternatives to making products in China, although it’s not clear what authority the president has to issue such an order.

The news from Beijing rekindled concerns about the world’s two largest economies and a global growth outlook that’s already looking shaky. After Trump’s tweets, U.S. stocks dropped — the S&P 500 Index closed 2.6% down on the day.

China’s newest tariffs came earlier Friday in retaliation for Trump’s latest planned levies on Chinese imports, which have pushed U.S. stocks and commodities lower. The move takes aim at the heart of Trump’s political support — factories and farms across the Midwest and South at a time when the U.S. economy is showing signs of slowing.

Some of the Chinese countermeasures will take effect starting Sept. 1, while the rest will come into effect from Dec. 15, according to the announcement from China’s Finance Ministry. This mirrors the timetable the U.S. has laid out for 10% tariffs on almost $300 billion of Chinese shipments.

China will put an extra 5% tariff on American soybeans and crude-oil imports starting next month. The resumption of a suspended extra 25% duty on U.S. cars will resume Dec. 15, with an additional 10% on top for some vehicles. With existing general duties on autos taken into account, the total tariff charged on U.S.-made cars would be as high as 50%.