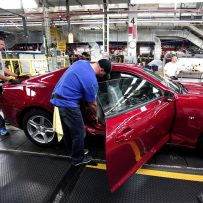 U.S. President Donald Trump’s plans to punish carmakers who produce vehicles outside the U.S. and sell them to Americans are hindering his administration’s efforts to close the deal on a new NAFTA this month.

Among the sticking points emerging during this week’s discussions in Washington between the U.S. and Mexico toward a renewed North American Free Trade Agreement is a proposal by the administration to increase the tariffs on cars imported from Mexico that don’t meet stricter new content rules, according to five people familiar with the discussions.

Even as the U.S. and Mexico have largely finalized a deal on the new auto rules of origin, the U.S. has been pushing for cars that don’t meet the threshold to be subject to a 20-to-25 per cent tariff, according to the people familiar with the talks. That would represent a major jump from the 2.5 per cent tariff the U.S. charges currently under World Trade Organization rules.

One of the few ways the U.S. could raise the tariffs on cars under WTO rules is by recourse to a Section 232 national security investigation that Trump ordered up in May into auto imports to justify raising import duties.

The threat of the 232 auto tariffs, which are widely opposed by U.S. and international carmakers such as GM, Ford, Toyota and BMW, has been seen as an attempt by the U.S. to build leverage in the NAFTA talks. It may be doing precisely the opposite, however, by backing Mexico and Canada into a corner and giving them less room at home politically to make the concessions necessary to reach a deal.

The office of U.S. Trade Representative Robert Lighthizer, who is leading the U.S. negotiating team, did not respond to an emailed request for comment.

Mexico has made clear to the U.S. that if the nations reach a deal to update the content rules for cars produced in the region and traded duty-free, those vehicles would need to be excluded from potential 232 tariffs, according to a person familiar with the talks, who asked not to be named discussing private negotiations. Mexico would not be satisfied living with the threat of 232 tariffs over its head, the person said.

Canadian officials have downplayed the significance of their exclusion from recent talks and argued that it is good for the U.S. and Mexico to resolve their own differences on thorny issues like autos and agriculture. But Canada — whose auto sector interests are largely aligned with the latest U.S. positions — will rejoin the talks eventually and will need to sign off on any breakthrough.

“Obviously [auto] rules of origin is an issue where detail matters, and Canada will very much have a voice in the finalization of all of this,” Chrystia Freeland, Canada’s foreign minister, told reporters Wednesday.

The Trump administration’s push in the NAFTA talks comes alongside continuing threats by the president to slap tariffs on cars imported from major manufacturing centers in Asia and Europe. “We’re going to put a 25 per cent tax on every car that comes into the United States from the European Union,” the president told supporters at a campaign rally in West Virginia on Tuesday, complaining that there were no Chevrolets to be seen on the streets in Berlin.

Officials on both sides have insisted that talks in Washington this week between the U.S. and Mexico have been going well with the White House eager to make an announcement of a bilateral deal as soon as this week. Such a move would clear the way for Canada to be brought back into the discussions for a final push toward a new NAFTA that could be signed by the three countries’ leaders by the end of the year.

“We don’t have a deal just yet. But I think a deal is very likely within reach in the very, very near future,” Wilbur Ross, the U.S. commerce secretary, told CNBC on Wednesday.

Jesus Seade, the lead NAFTA negotiator for Mexico’s president-elect, Andres Manuel Lopez Obrador, told reporters Wednesday that the objective remained to strike a deal by the end of August, and he believed the sides were coming to the end of the negotiating process.

The tussle over how to treat imported cars that don’t meet new stringent regional NAFTA content rules highlights, however, how the different elements of Trump’s aggressive trade policy are sometimes clashing.

The president and his aides have hailed a renegotiated trade agreement with South Korea as one major victory. Yet efforts to ratify that new agreement in South Korea have been complicated by the auto tariffs threat.

Likewise, the day before Trump made his comments about European cars in West Virginia this week, EU negotiators were in Washington to discuss how to proceed with negotiations over the outlines of a trade deal that hinge on Trump not going ahead with tariffs on European cars.

–-With assistance from Mark Niquette