Trudeau To Trump: NAFTA Deal Is Right There, If Some Demands Are Scrapped 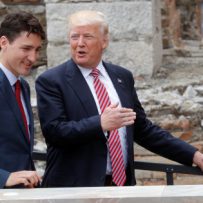 WASHINGTON — Prime Minister Justin Trudeau has reportedly told President Donald Trump that a NAFTA agreement is imminently within reach as long as some controversial demands are set aside.

That high-level conversation occurred in the midst of what many insiders view as a last-ditch push for a renegotiated agreement before impending political events pause the process until next year.

The characterization of Trudeau’s message to Trump came in a television interview in Mexico: the economy minister in that country revealed some details of the leaders’ chat earlier this week.

When asked about his conversation with the U.S. president, Trudeau confirmed that he views a renegotiated pact as promptly attainable and publicly repeated a similar message.

“There is very much an imminently achievable outcome that will be good for the United States, good for Canada, good for Mexico — and we’re very close,” Trudeau told a Calgary news conference.

“We will continue in the coming days to work hard to try and get there. We know that a deal is not done until it’s done. And we’re going to continue to remain optimistic and hard-working on trying to get this settled.”

Asked whether he asked the president to pare down his wish-list, Trudeau said: “We’re pushing defence of our own interests, but highlighting that it’s very possible to have a win-win-win.”

The countries are attempting to set up one more ministerial round this week, after which it may become too late to meet the U.S. procedural deadlines required for a vote before the midterm elections bring in a new Congress.

All three countries have some interest in wrapping up a quick deal: Canada to calm jittery business investors, Mexico to close the file before its presidential election and the U.S. to provide stability for struggling agricultural exporters.

They are swimming against a tide of unresolved issues and even competing agendas; insiders say there are mixed opinions within the U.S. administration on the value of additional rounds this week.

Months of efforts to close out the No. 1 issue of automobiles has left a host of other irritants unfinished — including dairy, pharmaceuticals, dispute resolution, public contracts and the U.S. demand for a five-year sunset clause.

Mexico’s lead minister says he doesn’t see a deal wrapping up by this week’s supposed target date. U.S. lawmakers say that if a deal doesn’t happen by Thursday, they won’t be able to schedule a vote this year and it’s possible the next Congress will want different things in the agreement.

Ildefonso Guajardo says it could happen soon, but probably not that soon.

‘We don’t believe we’ll have it by Thursday’: Mexican minister

“It is not easy. We don’t believe we’ll have it by Thursday,” Guajardo told Mexico’s Televisa network.

He also disputed the notion that there is a real deadline approaching — when the only thing that technically changes as of this week is that American lawmakers can’t vote on the deal until 2019.

Guajardo said the U.S. needs to show flexibility on some demands and he suggested Trudeau delivered a very similar message on Monday in his phone call with Trump.

“What Prime Minister Trudeau told him is there are the ingredients … there for arriving at an agreement,” Guajardo said. “As of this moment, you could have a negotiated deal at any time. …

“The problem is you need flexibility from the parties.”

He said the American side needs to drop some of its impractical, even contradictory proposals. He specifically mentioned the U.S. idea of a sunset clause, which would automatically end NAFTA after five years unless all three parties extend it.

Guajardo pointed to the chaos that could cause in the auto sector.

He said the U.S. is on the one hand forcing auto companies to spend the next few years reorganizing their supply chains to comply with the rules of a new NAFTA, while at the same time telling companies NAFTA could end in five years.

Canadian officials would not comment on this week’s Trudeau-Trump call — details of the leaders’ chats are usually tightly guarded, and the government would neither publicly confirm nor deny the specifics.

But both countries did release cursory statements revealing that the leaders spoke Monday about the prompt conclusion of negotiations.