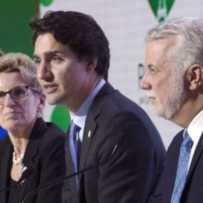 Prime Minister Justin Trudeau is claiming victory in his campaign to craft a national “framework” agreement on climate change — even though Saskatchewan and Manitoba remains provincial holdouts.

But surprise resistance from British Columbia’s Christy Clark and Manitoba’s Brian Pallister threatened throughout the day to upset Trudeau’s hopes for a triumphant finale to a year of federal-provincial climate negotiations.

Pallister, who has been pressing the federal government for concessions on health care funding, suggested he won’t agree to the framework until a health spending deal is in place.

“We want to move forward to build a partnership on health care,” Pallister said.

The sticking point for all three premiers was Trudeau’s plan to set a national price on carbon — starting at $10 a tonne in 2018 and rising to $50 a tonne by 2022 — and impose it on provinces that do not implement their own carbon pricing plan.

Wall is ideologically opposed to the idea of a carbon tax; B.C. already has a carbon tax but Clark wanted — and got — assurances that Ontario and Quebec’s cap-and-trade carbon market would impose an equivalent carbon price.

Even late in the day Friday, a deal appeared unlikely.

Clark emerged from the meeting to publicly kneecap the prime minister’s signature climate plan, but within minutes of those remarks, word began to emerge of a compromise.

Trudeau had unilaterally imposed an escalating floor price on carbon dioxide emissions, starting at $10 in 2018 and topping out at $50 in 2022, when the policy would be reassessed.

Under the compromise deal, the carbon price would pause at B.C.’s existing $30 level in 2020, when an independent expert panel will look at how the plan is evolving.

It was a sudden and surprising about-face from Clark, who less than an hour earlier had was telling reporters that the talks were grinding along slowly, that the matter was hard slogging and that an agreement appeared a long way off.

Indeed, before talks even began, it was Clark herself who shoved a hockey stick in the Liberal spokes, citing the unresolved matter of comparing Quebec and Ontario’s cap-and-trade carbon market to a national floor price proposed for other provinces.

“It’s got to be a fair deal. And you have to have one price for all Canadians if it’s going to be a national price,” Clark — who faces the B.C. electorate in a May election — said earlier in the day.

Wall had already flatly stated he won’t sign the proffered agreement and Clark was suggesting it might be prudent to “set aside clauses.”

Pressed on whether a deal would emerge, McKenna insisted one would — repeatedly calling it a “historic day.”

“This is a framework. ..,” the federal minister responded when asked what happens if some provinces won’t sign on.

“Then we need to implement. We need to take real action.”

Trudeau had already set the table when he opened the morning session with premiers, indigenous leaders and U.S. Vice-President Joe Biden by asserting, “We should not waver” in the fight against climate change.

Biden, just weeks away from the end of the Obama administration and the ascendency of Donald Trump’s Republicans, gave a rallying speech of sorts before departing the meeting.

But the promised show of pan-Canadian unity on climate policy was showing strains as the meeting began.

Wall said Ottawa has failed to provide an economic analysis of the biggest tax change in a generation, which he asserts will hammer Saskatchewan jobs and industry.

Wall brandished a heavily redacted Finance Department memo — obtained by a media outlet through an access-to-information request — that says a carbon tax would “cascade throughout the economy and prices would increase most for goods that make intensive use of carbon-based energy.”

And he made common cause with Clark, saying the federal plan will result in a competitive “imbalance” given emitters in central Canada, where cap-and-trade will mitigate emissions, face a lower carbon price than in western Canada.

Quebec’s carbon market is currently trading permits for about $8 per tonne, with a forecast the price will rise to $16 per tonne once Ontario’s market is fully up and running with Quebec and California in the Western Climate Initiative.

Paul Boothe, an economics professor at the Ivey Business School and member of the non-partisan Canada’s Ecofiscal Commission, said there’s no reason provinces must have identical tax rates, pointing to differing provincial sales and income taxes across Canada.

“I think this fairness discussion is a bit of a red herring,” Boothe, a former deputy finance minister in Saskatchewan, said in a telephone interview.

“What we’re trying to do is meet our (emissions) target at the lowest possible cost, not the highest cost.”

Ideally, B.C. and Alberta companies should be free to buy carbon credits from other jurisdictions instead of paying the carbon tax, which would ensure emissions reductions are achieved at the lowest price available.

Ontario Premier Kathleen Wynne, asked about equivalency, noted other moves already made by her province that have driven down emissions and driven up electricity prices.

“This is about reducing greenhouse gas emissions,” Wynne said before entering the meeting, adding that price is simply a “mechanism.”

“British Columbians are not paying for reductions in Ontario.”

The premiers also want to extract greater health care funding from the Liberal government, but several said they wouldn’t be linking the two crucial issues of climate change and health spending during Friday’s talks.

The backdrop to the long-planned first ministers conference is the looming change of government in the United States.

Biden told the assembled premiers they should take a long view of climate policy, because short-term political changes will be overtaken by reality.

“Whatever uncertainty exists around the near-term policy choices of the next president, I am absolutely confident the United States will continue making progress in its path to a low-carbon future.”