Trade war history is not on Justin Trudeau’s side 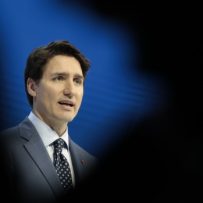 In 1969, Canadian Prime Minister Pierre Trudeau reflected on his country’s relationship with the United States in a speech to the Washington Press Club. “Living next to you is in some ways like sleeping with an elephant,” he said. “No matter how friendly and even-tempered is the beast…one is affected by every twitch and grunt.”

His son Justin Trudeau, the current prime minister, might be tempted to describe the U.S. in even more colourful terms, given his recent diplomatic row with the Trump administration. It’s hard to believe that the two countries are on the brink of a war over tariffs, since Canada is second only to China as a trade partner of the U.S.

While the current fracas seems like a deviation from longstanding norms, it likely signals the revival of a much deeper history of acrimonious commercial conflict between the two nations. These conflicts have had profound consequences for Canadian politics. Justin Trudeau should take note.

After Canada’s first prime minister, Sir John Alexander Macdonald, came to power in 1867, he hoped to set up a free-trade relationship between his country and the U.S. These efforts failed. After losing power for several years, Macdonald regained his position as prime minister in 1878 by promising what became known as the “National Policy.”

This was Canada’s version of “America First”: It imposed very high tariffs on manufactured goods from the United States, with lower tariffs on raw materials needed by Canada’s fledging manufacturing sector. Macdonald’s policy became the new orthodoxy, and in his final successful re-election bid in 1891, the opposition Liberal Party went down to defeat after espousing reduced tariffs under a policy of “unrestricted reciprocity.”

The appeal of protectionism went well beyond economics. Many Canadians feared a commercial union with the U.S. would invite the absorption of their country by the elephant to their south. In fact, when the Liberal Party managed to secure a provisional free-trade agreement with the Americans in 1911, the Conservatives fanned fears that commercial reciprocity would lead to political annexation, and in the next election the Liberals lost.

For the remaining decades, Canada maintained its hostile stance toward free trade. The one time that trade barriers fell, between 1913 and 1921, it was the U.S. that unilaterally lowered tariffs on Canadian goods. After Congress reversed course with the passage of the Fordney-McCumber Tariff in 1922, cross-border trade resumed its usual contentious dynamic.

Predictably, the Liberal Party resumed its attempts to liberalize trade. Its leader, William Lyon Mackenzie King, hoped that lower tariffs would enable him to forge a winning political coalition. But the twitches and grunts of the elephant to the south ruined those plans.

In 1928, Herbert Hoover sought the Republican nomination. His platform included plans for higher tariffs on agricultural products, with Canada being the country most likely to suffer from these policies. After Hoover won the presidency, most Canadians doubted he would take any drastic measures. In 1929, the Toronto Globe expressed confidence that Hoover would “do everything in his power to discourage Congress from enacting drastic tariff increases whose chief effect would be to arouse resentment in Canada.”

But King, writing in his diary, expressed fears of a “tariff war developing,” and grimly predicted that Canada “could and probably would retaliate” if the United States made such a move. King hated the idea, but he knew that his Liberal Party was vulnerable on the issue. He proved prescient. Indeed, by this time, the new leader of the Conservative Party, Richard Bedford Bennett, was arguing that Canada should wall itself off from the U.S., and reorient its trade toward Great Britain.

In 1930, as the Great Depression began to cripple the global economy, Congress passed the infamous Smoot-Hawley Tariff Act, which slapped a host of costs on Canadian goods. Bennett lost no opportunity to slam King and the Liberals as weak in their dealings with the Americans.

In a campaign speech, Bennett fanned nationalist fervor, declaring: “I will not beg of any country to buy our goods. I will make [tariffs] fight for you. I will use them to blast a way into markets that have been closed.”

Bennett rode these promises to victory in 1930, driving King from office. Canada soon slapped retaliatory tariffs on the U.S. and deliberately steered its trade toward the British Empire.

But retaliatory tariffs couldn’t save Hoover and Bennett. Both went down to ignominious defeat thanks to the Depression, replaced by Franklin Delano Roosevelt and, yes, Mackenzie King. In the 1930s, these two leaders began crafting the first agreements to liberalize trade relations. This time, King managed to quell anxiety in Canada that it would become a vassal state of the U.S. In the postwar era, he used the General Agreement on Tariffs and Trade, signed in 1947, to lower barriers.

These efforts laid the groundwork for further liberalization of trade, including the Canada-United States Automotive Products Agreements and, eventually, the North American Free Trade Agreement. In the eyes of Donald Trump, it was precisely this liberalization that has left the United States vulnerable, necessitating a revival of retaliatory tariffs.

If Trump continues waging a trade war, this will almost certainly lead to a revival of old-fashioned Canadian nationalism. The Conservative Party could readily use the conflict to ride back into power, toppling Trudeau’s Liberals, much as the Conservatives did repeatedly so many years ago.

And while Canada can no longer turn to the British Empire to replace trade with the Americans, there are other options available.  China is currently Canada’s second-largest trading partner. There is no reason the Chinese can’t eventually supplant the U.S. for the top spot.

Such a shift would come at the expense of American jobs, prestige and influence, while strengthening China. In the long run, that’s not going to Make America Great Again.