Toronto’s population expected to swell to nearly 6.7 million by 2025 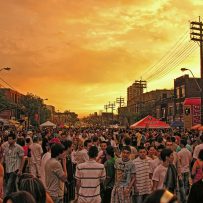 The streetcars are crammed with commuters in rush hour, Trinity Bellwoods Park is jam packed on warm days and swarms of shoppers descend on the Eaton Centre on weekends. There are pockets of Toronto that tend to feel more than a little bit crowded much of the time. But according to Bloomberg News, the city will feel even more densely crowded in the years to come.

A ranking of the “most crowded cities” looked at 40 urban areas around the globe. It listed cities where population growth within one generation (or between 1995 and 2025) was expected to reach 4.5 million, based on population per square mile. The ranking used numbers from Bloomberg’s own data, Demographia, International Monetary Fund and the United Nations.

As far as generational growth is concerned, Bloomberg listed Riyadh, Saudi Arabia in the top place with a 166.6 per cent surge, followed by Jiddah, Saudi Arabia (137.4 per cent) and Brasilia, Brazil (118.6 per cent).