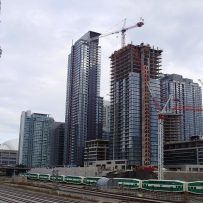 Toronto housing developers could cancel the construction of up to 5,000 condo units as the costs of borrowing and building soar, according to an analysis by leading condo research group Urbanation Inc.

Construction costs have climbed across the country. Putting up a high-rise in Toronto is now 21 per cent more expensive than it was during the same quarter of last year, according to Statistics Canada’s building construction price index. And with the Bank of Canada’s benchmark interest rate having risen 125 basis points in the past four months, construction loans are also becoming more expensive.

Such an increase in costs can put a developer in a bind, because projects typically can’t receive construction loans until most of their units have already sold to preconstruction buyers. The time between preconstruction and occupancy is usually about five years. If costs rise during that interval, a developer can’t easily raise prices to compensate, because many of its condos are presold. Instead, the increased expenses eat away at profit margins. When projects become unprofitable, they are often cancelled.

According to Urbanation’s research, about 5,000 preconstruction units were sold last year for less than $1,000 per square foot, which would make them economically unfeasible to build under current financial conditions. “Many of those could cancel,” said Urbanation’s president, Shaun Hildebrand.

If Toronto developers start cancelling projects, buyers who made deposits on preconstruction condos will have their money refunded, as required by Ontario law. But those who signed sale agreements years ago could find that they now have to pay higher prices for similar units.

Tarion, the province’s new-home consumer protection organization, says on its website that developers are required to specify conditions under which their projects could be terminated. Those conditions could include a developer failing to secure necessary financing, or not meeting the minimum number of preconstruction sales needed for a building to proceed.

The rise in the cost of building condos in the Toronto region had already begun before the pandemic disrupted supply chains and drove up prices of building materials such as wood. From early 2017 to today, construction costs are up 50 per cent, according to commercial real estate data firm Altus Group.

The last time Toronto experienced a wave of condo cancellations was in 2018, when developers called off 4,687 units because of rising construction expenses, according to Urbanation.

“When cost escalation is 10 per cent to 14 per cent, you can lose your profit in less than a year,” said David Schoonjans, senior director of cost and project management for Altus. Developers that launched projects in 2019 and have not yet broken ground are facing a 30-per-cent jump relative to construction costs at that time, according to Altus data.

Even if global supply chain problems dissipate and goods start to move more quickly, Mr. Schoonjans said, the Toronto region will continue to deal with rising costs because of the sheer volume of new home construction in the area.

Housing starts reached a record high across the country last year, and the Toronto region saw record-high condo starts. That has increased demand for experienced carpenters and other construction workers.

“The market is so overloaded and schedules are being extended and missed,” Mr. Schoonjans said. “There’s just more work than there is capacity to perform it, and that would be the case even without the pandemic.”

Real estate developers could raise the prices of units in future projects in anticipation of higher costs, but buyers may not be willing to spend much more than they already are. The average cost of a preconstruction condo in Toronto is already near $1,400 per square foot, according to Urbanation.

The bulk of preconstruction condo buyers are investors, each of whom would need a tenant to pay at least $3,000 a month to cover the mortgage payment on a 500-square-foot unit purchased with a 20-per-cent down payment at today’s typical five-year fixed rate, which is around 5 per cent. That does not include condo fees or other home ownership expenses, such as taxes and upkeep.

Urbanation says developers had planned to launch projects totalling 12,900 condo units in the Toronto region during the second quarter of this year. As of mid-June, 8,606 units had been brought to market in the quarter, according to Urbanation’s numbers.