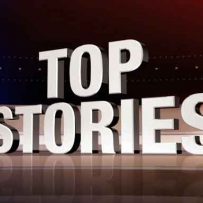 CTV London bureau correspondent Daniele Hamamdjian kicks off the top 10 countdown on Dec. 23, with a look back at Prince Harry and Meghan Markle’s extraordinary wedding. Hamamdjian reflects on the spectacle that attracted millions of viewers, the star-studded ceremony and the drama surrounding the former actress’s family.

This has been an especially deadly year in Toronto, with the city notching more than 90 homicides so far amidst a spate of brazen shootings and calls for a handgun ban. The numbers eclipse the previous record of 89 total homicides in 1991 and 80 in 2005, which was dubbed the “summer of the gun.”

On Dec. 24, CTV Toronto bureau correspondent John Vennavally-Rao looks back at a year in which violent incidents—including the van attack and mass shooting on the Danforth—shocked and outraged the city.

On Dec. 25, London bureau chief Paul Workman looks at the terrible cost of war and the millions of civilians it has left displaced and desperate this past year. From the plight of the Rohingya Muslims of Myanmar to the humanitarian crises unfolding in Yemen and Syria, thanks to conflicts that have dragged on for years. It has been a year of human suffering in many parts of the world.

Few places in the world escaped natural disasters in 2018, from tornadoes that ripped through the Ottawa area in September to deadly hurricanes, cyclones, earthquakes and massive wildfires worldwide. CTV Atlantic bureau chief Todd Battis on Dec. 26 recounts the destruction that nature wreaked on Earth, and the fear that consequences of climate change could lead to even more calamitous events in the future.

The daring rescue of 12 children who were part of a Thai soccer team and their coach, caught deep inside the flooded Mae Sai cave complex in Chiang Rai, was number six in our top 10 stories of 2018. CTV’s Peter Akman on Dec. 27 recounts the drama that riveted the world and the stunning moment when British divers found the missing team.

CTV Montreal bureau chief Genevieve Beauchemin looks back on the year Canada’s marijuana laws became the focus of the world. Statistics Canada says Canadians bought $43-million worth of pot in the first two weeks after legalization went into effect on Oct. 17. But it’s clear that two months into legalization, the new pot regime is still working out kinks in the supply chain and the enforcement of new rules.

On Dec. 30, CTV Ottawa bureau chief Joyce Napier recaps a challenging year in trade for the Liberal government. From uncertainty over the Trans Mountain Expansion Project to a revamped NAFTA deal, signed after an acrimonious trade war with the U.S., it’s been a steep learning curve for a government looking for new trading partners on the international scene, realizing it needs to end total reliance on the U.S.

Canada’s economy continues to grow and unemployment has fallen to its lowest level in 40 years, but after GM’s bombshell of an announcement to close its Oshawa plant and a downturn in the oil sector, the Liberal government is under great pressure to turn things around as it heads into an election year in 2019. CTV senior political correspondent Glen McGregor recaps the biggest news this year in Canada’s economy, on Dec. 31.

The bus crash on April 6 that left 16 people dead and 13 injured shocked the northern Saskatchewan city of Humboldt and reverberated throughout Canada and the hockey world. Among the dead were 10 players ranging in ages 16 to 21, and six team personnel.

On Jan. 1, CTV Winnipeg bureau chief Jill Macyshon recaps our number one story of 2018 – of a town with a population of 6,000 rocked by the tragedy but united in support of their lost loved ones, with donors worldwide raising $15.2 million for victims’ families.