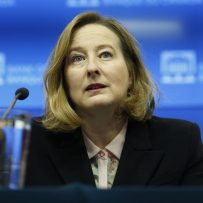 The Bank of Canada’s ability to counter financial stability risks is limited, and policy makers need to do more to strengthen other available tools to combat problems such as high household debt, the central bank’s No. 2 official said.

In a speech at a conference about the 2008 financial crisis, Senior Deputy Governor Carolyn Wilkins cited three areas of “unfinished business” that need to be tackled in order to ensure the durability of reforms that have taken place over the past 10 years. One is the ongoing debate about what role monetary policy should play in tackling financial vulnerabilities.

The old debate about whether central banks should raise rates to counteract housing bubbles and high debt has been finding new life in Canada as the country copes with a recent surge in home prices. The Bank of Canada has been under some pressure to raise interest rates more quickly to stem the buildup of borrowing.

Wilkins acknowledged that lower interest rates have fueled vulnerabilities and said the central bank already takes financial stability into consideration in its policy making. She cited, for example, the central bank’s decision to hold off from lowering rates in 2013 because of concerns it could fuel indebtedness.

But the central bank’s primary mission is inflation targeting, and moving too fast on rates could have “outsize effects” given the high household debt, she said.

“The unfinished business here is coming to a consensus about what monetary policy can and should do about financial vulnerabilities, and about how monetary policy fits into the rest of the policy framework,” she said. “Clearly microprudential and macroprudential regulations are on the front lines,” she said, referring to rules such as tougher mortgage qualifications that make the financial system more resilient.

To help “advance” the discussion, Wilkins proposed more investment in policy models that capture linkages between the financial system and the economy and strengthening the “framework” for macroprudential policies, “which are better suited to target financial system risks.”

That includes more clarity about “objectives, governance and tools for the job,” she said.