TIFF MACKLEM ACKNOWLEDGES MISJUDGING INFLATION, PLEDGES TO ACT ‘FORCEFULLY’ TO BRING IT DOWN 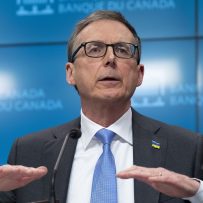 Bank of Canada Governor Tiff Macklem acknowledged he and his lieutenants misjudged the strength of inflation at the start of the year, and pledged to act “as forcefully as needed” to make up for the mistake.

“(We’re coming) out of the deepest recession we’ve ever had,” Macklem said during testimony at the Senate banking committee late on April 27. “We got a lot of things right. We got some things wrong, and we are adjusting.”

To the surprise of many on Bay Street, the Bank of Canada opted against raising interest rates in January, despite evidence of some of the fastest inflation in decades. However, Macklem stayed his hand, leaving the benchmark rate at an emergency setting of 0.25 per cent, although he did make clear that rates would soon rise as the economic slack had largely been absorbed. The move drew criticism from economists, and some said the decision hurt the central bank’s credibility.

Macklem argued the central bank’s aggressive monetary policy response helped fuel the economic rebound that brought the unemployment rate to 5.3 per cent, a record low, and boosted economic activity and business investment. In January, the central bank said it was wary to raise interest rates because it remained unclear how the economy would respond to a new wave of COVID-19 infections. Macklem flagged the resurgence of COVID cases in parts of China, which has prompted a massive stall in activity at the Port of Shanghai, as evidence that the economy remains vulnerable to the pandemic.

“Thanks to very effective monetary policy, fiscal policy, highly effective vaccines, and to a large extent the resilience and adaptability of Canadians, we’ve had the fastest, strongest recovery we’ve ever experienced,” Macklem said. “There are some new challenges; these supply chain disruptions have surprised us. They have been more persistent and more pervasive than we thought.”

Rampant inflation is still a concern with which the central bank will have to contend. In January’s monetary policy report, policy-makers said they expected year-over-year increases in the consumer price index to hover around five per cent in the first half of 2022. Since then, the Russian invasion of Ukraine, among other risks, caught markets by surprise, pushing up global commodity prices.

The Bank of Canada’s latest monetary policy report, published earlier this month, sees headline inflation of around six per cent in the second quarter. The estimate could also prove to be optimistic, as the consumer price index surged to 6.7 per cent in March, its hottest reading since January 1991.“If you go back to January, yes, we were saying inflation would peak at about five per cent — and you know by now, you (would) start to see some signs coming down,” Macklem said. “It’s now 6.7 per cent and it’s going to take longer to come down. We are responding to that and we’ve indicated that we will respond as forcefully as needed.”

The Bank of Canada moved on a quarter-point hike on March 2 and the first half-point increase in 22 years on April 13, bringing the overnight rate up to one per cent. The Bank of Canada team has been signalling the path of interest rate hikes would be steeper to rein in inflation, most recently hinting the Bank could temporarily move above the neutral rate range of two to three per cent: the level that would neither help nor hinder economic growth.

Macklem suggested in late April that another half-point hike could be in the cards, though anything larger than that would be “very unusual.”