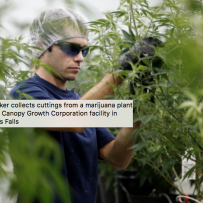 With the legalization of recreational cannabis fast approaching, Canada’s leading pot players are preparing for a historic transfer of wealth. Billions of dollars worth of black market sales are expected to shift to a fast-growing group of legal producers, such as Canopy Growth.

“There will be a multi-year rollout where I think we really do become the source,” Canopy CEO Bruce Linton told BNN in a recent television interview. In anticipation of that, investors have pushed Canopy’s stock price up more than 850 per cent in the past two years, boosting the company’s market capitalization to $5.5 billion.

“It’s similar to the time after prohibition,” industry expert Jay Rosenthal told BNN in an email. “Once the legal ban was lifted, consumers stopped drinking moonshine because better, safer options were available,” according to Rosenthal, co-founder of Business of Cannabis, which tracks marijuana industry trends. “Buying untraceable cannabis from a guy in a parking lot is just not going to be able to compete.”

If that proves to be the case, the black market has plenty to lose.

According to Statistics Canada, Canadians spent an estimated $5.7 billion on cannabis last year, with the illegal recreational cannabis accounting for the vast majority of that sum at $4.6 billion.

Canopy Growth CEO: Marijuana bill will make it more difficult to be a criminal in black market

Canada’s largest marijuana producer, Canopy Growth reported a surprise profit along with a big jump in revenue. We hear from Bruce Linton, CEO with Canopy Growth on how legalization will impact the black market and financing plans.

“The easiest money criminals make is in the illegal production and sale of cannabis,” Bill Blair, parliamentary secretary to the justice minister, told BNN in a television interview in early February. “We’re now going to compete effectively with them and give Canadians a better, more responsible choice at a competitive price.”

For the past two years, Blair has served as Prime Minister Justin Trudeau’s pot czar. While the former Toronto police chief is one of Ottawa’s biggest cheerleaders for a legal market, he’s also the first to acknowledge black market producers won’t go down without a fight.

“I’ve been fighting those same criminals for most of my entire adult life. And of course, they’re going to play dirty. And so we’re going to make sure that law enforcement has the resources, the technology, the training and the tools they need to deal effectively with that criminal enterprise.”

In fact, that criminal enterprise isn’t just producing pot in Canada to sell to Canadians. Statistics Canada estimates $1.2 billion worth of cannabis – or 20 per cent of last year’s total production – was illegally sold outside the country.

Parliamentary secretary Bill Blair joins BNN to highlight some of the main sticking points in Bill C-45 and 46.

With so much black market money at stake, one question being asked is whether illegal producers will lower their prices to maintain market share.

Joanne Crampton, the RCMP assistant commissioner for federal policing criminal operations, told MPs on the House of Commons’ health committee in September that it would be “naive” to think organized crime can be eliminated from the cannabis market, with one concern being “the undercutting of legal prices.”

“I think we can see from the legalization in Washington and Colorado that the prices will drop and they will drop significantly,” Neil Boyd, a criminology professor at Simon Fraser University, told BNN in a television interview. “In Washington State, for example, the current price in the legal market is about a quarter of what it is in the British Columbia illicit market (or grey market). So I think we have to expect those changes.”

A recent study also highlighted confusion over prices. Statistics Canada found, on average, that Canadians pay less than $7 per gram for marijuana, based on responses from 15,000 people. That compares to a $10 per gram estimate Ottawa unveiled in December, when it announced its tax revenue sharing agreement with the provinces and territories.

Beyond the issue of pricing, the head of fast-growing cannabis company Aphria says licensed producers need to educate consumers about why their products are better and safer than those sold by criminals.

What happens to the black market once marijuana is legalized?

Neil Boyd, Professor at the School of Criminology at Simon Fraser University, joins BNN to discuss what could happen to the illegal market once marijuana is legalized.

“The battle against the black market will not be won on price alone,” Aphria CEO Vic Neufeld told BNN in an email. “Health Canada regulations for product quality and testing are paramount for ensuring the adult-use market has access to safe, clean and pure cannabis products – something not offered by the illegal market.

Neufeld, a former head of Jamieson Laboratories, is hoping that message will be effective, as Aphria plans to boost its production capabilities to 230,000 kilograms of dried cannabis per year by 2019.

In reality, though, the message some Canadians are receiving, for now, is one of uncertainty.

“From a public opinion standpoint – we are seeing increasing concern about the timelines and the details surrounding legalization,” Shachi Kurl, executive director of the Angus Reid Institute, told BNN in an email. “What will it look like? Are local police and municipalities prepared? Nearly half the country would like to see the federal government slow the process down, and that includes people who support legalization in general.”

But there are few signs of a slowdown.

Assuming the legislation to legalize recreational marijuana (Bill C-45) passes in the Senate in June, Canadians could buy recreational cannabis as early as August.

“Illegal activities are extremely entrepreneurial,” Linton told BNN in a television interview. “There are quite a few other fields you can put your money into. I don’t think this has been their best growth area for a long time…I think it will just sort of ween off slowly.”