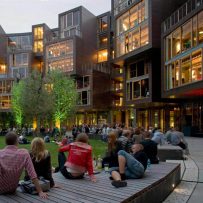 This phenomenon was especially apparent in rental spaces situated closer to educational institutions.

“These incoming foreign students need somewhere to live, and with the increased population growth, there will be pressure on the housing market in university towns,” Tencer quoted a recent analysis by the Real Estate Investment Network.

The REIN study also found that as little as 3% of Canadian university students reside in purpose-built student housing outside campus, compared to the 10% ratio south of the border and 12% in the United Kingdom.

This cohort’s Canadian presence has grown by 119% from 2010 to 2017, and is estimated to spend around $8 billion annually, including tuition and housing/living expenses. As of the end of that period, there were 494,525 international students in Canada.

Chinese students comprised around 28% of this total, while India represented 25%. Approximately 15,000 originated from the United States.

In particular, British Columbia is seeing the growing influence of these students, according to the Canadian Bureau for International Education (CBIE).

BC itself draws in an average of 115,000 international students annually, with each paying an average of $12,000 per year on housing. Over the last 10 years, foreign enrolment in BC’s educational institutions grew by as much as 300%, making it one of the country’s most popular choices.

CBIE cited Canada’s safety, reputation for tolerance and non-discrimination, and quality of higher education as the main factors in Canada’s attractiveness among foreign learners.