‘THE DOOR GETS SHUT ON THEM’: YUKON NGOS HELP CLIENTS FIND HOUSING 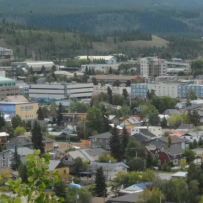 Yukon non-profit groups are appealing to landlords on business terms, promising stability and accountability if their clients are accepted as tenants.

The non-profit groups guarantee they’ll pay rent, and will also be accountable for damage.

“We as an organization become the tenant. We rent from the landlord and then rent out that unit to our clients,” explains Elena Ross, housing navigator for the Victoria Faulkner Women’s Centre.

Since 2013, a program called Landlords Working to End Homelessness (LWEH) has managed to find rental properties for dozens of vulnerable people in Whitehorse.

Ross says landlords have been responding to this offer as it “speaks their language,” by promising a responsible tenant.

“I keep an close eye on their properties,” Ross said about her pitch to landlords. “Of course it is one of the biggest investments that they make. They don’t want it to be wrecked.”

Staff check in with weekly visits

One condition with the Victoria Faulkner Women’s Centre is that clients in the LWEH program get a weekly visit.

Ross said the visits allow her organization’s staff to check for any issues while also seeing how their clients are faring with school, counselling and other matters.

As part of the model, the NGO handles communication between landlord and tenant, including conflict resolution.

“We mediate between the landlord and the tenant if there are issues, in order to prevent the eviction. If there is damage to the unit, we help out with repairs,” Ross said.

‘The door gets shut on them’

For many clients the issue isn’t money to pay rent, it’s access to housing. Ross believes many of her organization’s clients wouldn’t be given a chance without the LWEH program.

“Once they’ve stated they’re on [social assistance], I find the door gets shut on them,” Ross said.

But even with LWEH, dozens are still left out.

Ross says since she started her position a year ago, more than 50 women have filled out intake sheets trying to gain housing through the program. So far this year, the centre has managed to find rentals only “for one family and one single.”

The LWEH program was started by Whitehorse’s Blood Ties Four Directions Centre and the model has now been adopted by different NGOs in Yukon including the Victoria Faulkner Women’s Centre, Yukon Anti-Poverty Coalition and Fetal Alcohol Spectrum Society Yukon (FASSY).

I think it’s a win-win

John Mimee, a housing outreach worker with FASSY, says there are challenges but he believes the model has proven its value.

“There have been damages that were incurred. It comes with the territory. We’ve signed up that those damages get taken care of, and that’s what we end up doing,” he said.

Mimee says FASSY handles communication with tenants, which he says calls on staff’s training and knowledge of FASD.

“We’re looking for people who are in need, but who are not going to require constant, 24-hour support,” he said.

“It has to be somebody who has the wherewithal to manage most of their day-to-day but still needs someone to check in to make sure their rent is being paid, or to intervene with their neighbours, who they might not have the social skills to speak to.”

Some clients who were given a chance by landlords have maintained rentals for more than three years.

However, she says it is a challenge to find affordable properties. The model sees tenants pay their own rent and is not a rent subsidy.

“One of the largest challenges has been finding rental accommodations that our tenants can afford. Currently in Whitehorse the cost of most rental units on the market is significantly above social assistance rates,” Renwick-Shields wrote to CBC in an email.

Names of clients names and landlords participating in the program were not shared with CBC due to privacy concerns. CBC also attempted to contact the Yukon Residential Landlord Association and did not receive a response.

She has yet hear of a similar program outside Yukon geared to people with FASD. She hopes other NGOs will see value in the idea.

“I think it’s a win-win,” she said.  “We can make sure someone is healthy, happy and safe, and the landlord is having their unit filled successfully.”