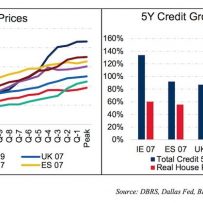 DBRS has compared several housing bubbles dating back to the late ‘80s with Canada’s rapid growth in home prices and credit in recent years.

The credit-rating agency’s findings suggest that even if Canada’s housing market is in a bubble, far bigger ones have existed before in terms of those two metrics.

For example, the runups in Canadian home prices and household borrowing since 2012 are less rapid than in every historic example DBRS examined but one: the pre-recession US housing boom.

“While not an extreme case, real credit growth in Canada has expanded quickly, which suggests an elevated level of risk in the event of a housing market correction,” the report continues.

However, recent gains don’t stack up to what was observed during the late-‘80s in Canada. They are also less dramatic than the parabolic increases recorded in the UK in the late-‘80s and early 2000s, as well as Spain in the five-year period ending in 2007.

And DBRS outlines multiple ways in which the Canadian financial system of today is more insulated from the effects of a crash than America’s was ahead of that country’s last housing bust.

Another factor is strong population growth in large Canadian urban centres, a trend that feeds demand for housing. Population growth is often touted as a fundamental driver of home prices in the Greater Toronto Area, Canada’s biggest housing market.

There’s also more regulation in place that guards against a sub-prime mortgage crisis of the kind that roiled the US market and helped spark the Great Recession.