TENANTS CALL ON LANDLORDS AND PROVINCE TO STEP UP, OFFER RENT RELIEF PROGRAMS 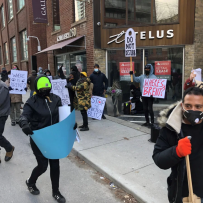 A group of disgruntled tenants held a peaceful demonstrations outside the offices of MetCap’s Parkdale office calling for a negotiated resolution that would see neighbours remain in their homes without fear of eviction.

“We know there’s going to be more lockdowns, we know more businesses are going to close, people are going to lose their jobs and a lot of people are taking a hit this year financially. I don’t think landlords should be exempt from that,” said Parkdale resident Matt Whittman, who was also taking part in the protect.

“We need landlords to step up and forgive some rent, we need governments to step in and pay some rent or even declare a rent holiday for the course of the winter and bail out landlords that need it on a means tested basis.”

The ongoing dispute has led to some solidarity strikers withholding their rent payments in support of those who are behind on rent because of the mounting struggles attributed to COVID-19 and government shutdowns.

“Right now, organized tenants have a responsibility to sort out the immediate situation we are in,” said Bryan Doherty, a Parkdale tenant and organizer. “This is why we are calling on MetCap CEO Brent Merrill to meet with us this Saturday for a real conversation. His company manages tens of billions in assets. They are in a position to solve this.”

Tenants have come to the table with potential solutions including one from the Federation of Rental Housing Providers of Ontario (FRPO). The organization is suggesting provincial government accept a proposal that would see tenants pay 50 per cent of arrears in exchange for a taxpayer-funded landlord bailout of 25 per cent.

In a statement, the province stated that the Ford government has launched $510 million Social Services Relief Fund (SSRF). Municipalities and Indigenous program partners have been using this flexible funding to expand local rent and utility banks, create long-term housing solutions and provide immediate assistance to our most vulnerable.

“In partnership with the federal government, we also launched the Canada-Ontario Housing Benefit, which has provided direct rent assistance payments to 5,200 households to date — with more families receiving approvals every day. This is a portable benefit, that tenants can use in any type of housing, anywhere in the province,” writes Adam Wilson, a spokesperson for MPP Steve Clark the Minister of Municipal Affairs and Housing.

“In addition, we passed the Protecting Tenants and Strengthening Community Housing Act — which requires the Landlord Tenant Board (LTB) to consider whether landlords attempted to negotiate repayment plans with tenants, before resorting to evictions.”

Many Canadians have had to rely on the Canada Emergency Response Benefit (CERB) to help make ends meet but financial advisers caution about relying on that cash-flow as it could easily dry up.

“There’s a real risk that we’re going to see, you know, potentially record high evictions, also record high insolvencies,” explains Keith Emery, co-CEO of Credit Canada. “We know that insolvencies have been depressed and we know that at some point those are going to have to be pushed through the system and there’s just a fear that there will be a tidal wave as opposed to an organized and gradual approach to getting people off of those income supports.

“We are quite concerned that it is going to be like coming off a cliff if the income supports end.”

Toronto Mayor John Tory has said publicly over the last several weeks that he does not support evicting tenants who cannot pay and has urged landlords to come to a solution before travelling down that road.

“Evictions are exclusively governed by provincial law, and the emergency the province has been right to declare should extend to a halting of residential evictions for the duration of the broad public health restrictions,” writes Lawvin Hadisi, a spokesperson for the mayor. “This should also include cooperation from landlords who should be offering temporary relief to all tenants experiencing financial hardship due to the pandemic.”

“The money that has been provided by CERB and other financial assistance programs hasn’t been enough to pay the bills let alone buy groceries,” explains Vanessa Collins.