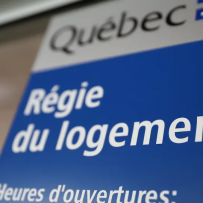 As moving season approaches, concerns continue about an increase in so-called renovictions when landlords evict tenants to renovate then raise the rent.

Tenants rights groups say the practice must be stopped.

Thomas Reimann is one of those contesting a renoviction.

“I’ve been living there for almost 40 years, (and) now they say they want to make the apartment bigger or smaller – I don’t know – but my lawyer tells me that they don’t have permission to do this,” he said.

Article 1959 of Quebec’s civil code allows landlords to evict tenants for several reasons including to enlarge the dwelling substantially.

“What we see is that it’s become a vehicle to just push out tenants and raise rents,” said Torres of Project Genesis. “Oftentimes the landlords don’t do the renovations they’re going to do. That’s just an excuse.”

Torres feels this is the case for Reimann and others contesting the article.

Woods has been living in the same place for 49 years, but along with 35 other tenants in the building, he received an eviction notice.

“They just say renoviction – renovate this, renovate that but exactly what they don’t say,” said Woods. “It could be anything. It could be nothing.”

The Quebec Landlords’ Association says the rules aren’t fair for landlords either.

“We have a landlord who isn’t able to make major repairs because rent criteria of the government of Quebec is too low,” said Hans Brouillette of the association. “It takes more than 43 years to be able to recover an investment in major repairs.”

He said it could take four decades just to recover the cost of installing a new door because the government doesn’t allow landlords to increase rent at a fair rate.

Both sides argue the provincial laws need to change to respect both tenants’ and landlords’ rights.