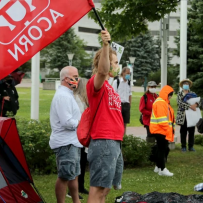 A group of holdout tenants from two Vanier apartment blocks say they’re being unfairly “reno-victed” from their homes by the buildings’ new owners.
The owners, however, say they’ve done their best to accommodate tenants and that the buildings were infested with rodents and bed bugs and had been flagged by the Ontario Fire Marshal for “numerous fire safety issues.”
Several of the residents have lived in the two six-unit buildings at 249 and 253 Pères-Blancs Avenue for more than 30 years.Mark Quinn has lived in No. 253 for more than a decade. He says the buildings’ new owner, a company known as OPG Holdings, had representatives go door to door in March telling tenants they’d bought the building and intended to demolish it.

A spokesman for OPG, who gave only his first name, Justin, said nine of the 12 tenants signed an N11 agreement — a contract to voluntary end their tenancy — and are to leave by the end of July. The three remaining tenants were given N13 agreements — an eviction notice for reasons of demolition or extensive renovations. A fourth tenant, who previoulsy signed an N11, is now refusing to leave, Justin said.

“We are new property owners, not a big conglomerate. We are not trying to demo-evict anyone. The living conditions are horrendous in these buildings,” Justin said in an email to this newspaper. “We have never been in this situation before.”Quinn said the tenants were intimidated into signing the N11s.

“They have successfully scared a number of tenants into leaving their homes before they even owned the buildings,” Quinn said Thursday at a rally organized by the tenants’ right group Ottawa Acorn.

Quinn pays $775 a month for his one-bedroom unit, which he says is all he can afford. Quinn receives an Ontario Disability Support Program and works when he can: “All above the table. Legitimate jobs.” He keeps his apartment tidy, but acknowledged the building does have some problems.

“We’ve had floods. I’m sure there’s damage to the walls, to the ceilings, to the floors. I could certainly use a new bathroom. In over a decade, nothing’s be done to the apartment except what I’ve done myself.”He said OPG Holdings sent him a list of rental apartments posted on Kijiji. He called the gesture “insulting.”

“I didn’t check any of them. I did, however, do a search for a one-bedroom apartment for $900 or less. One came up in all of the City of Ottawa.”

Imagine, he says, “If I were to say to one of them, ‘You own a home and someone shows up at your door and says, ‘You’ve got to move in three months.’ And he sends you a list of 30 houses for sale and says ‘Pick one. Now get out.’”

But OPG says they’ve gone above and beyond to help the tenants, offering several months of free rent and searching for alternate accommodation in the area. It’s even willing to allow the four holdouts to return once the work is done.

“Every time we make concessions and think we find common ground, they come back asking for additional unreasonable demands,” Justin said in his email.The situation highlights the need for more protection for tenants, says Coun. Mathieu Fleury, who represents the area and is also chair of Ottawa Community Housing. He brought a motion to council last November asking the city’s legal department to see what the city can do to reduce reno-victions and demo-victions. He’s still waiting for an answer.

“I’m doing all that I can to make sure that we understand the legal environment we’re in and whether we have the right bylaws in place,” said Fleury, who attended the rally and met with the tenants. “That would equip tenants much better and be clear to landlords of the expectation here in Ottawa. Right now it’s a bit like the wild west. People flip, acquire property and don’t respect the existing rights of tenants.”

Though most disputes are governed by Ontario’s Landlord and Tenant Board, some municipalities have bylaws and planning regulations that require developers to replace affordable units one for one. Ottawa Acorn has lobbied for just such a 1:1 rental replacement bylaw or for developers to make 25 per cent of new builds affordable housing. It also wants evicted tenants to have the right of first refusal on new units and temporary relocation assistance for people who lose their homes.Justin of OPG says the dispute on Pères-Blanc has reached a crossroads.

“Every time we come to terms they ask for more and threaten actions against us and therefore we have hit a crossroad,” he wrote. “We feel helpless as we have gone above and beyond to reach an amicable solution.”