Student Housing In Canada Is Being Ignored, And It Might Be Why You Can’t Afford Rent 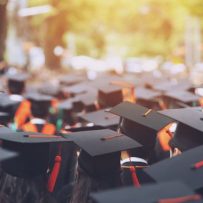 There are more than 400,000 international students in Canada, and no one is building housing for them.

But the problem may have more to do with a somewhat different group of people landing on our shores, and the fact no one is building housing for them: international students.

The number of students from abroad in Canadian universities and colleges is rising rapidly, up 119 percent between 2010 and 2017, according to data from the Canadian Bureau for International Education (CBIE), which estimates there were 435,415 international students in Canada at the end of 2018.

Add to that the fact that a larger share of Canadians than ever are attending university or college, and that they are staying in those schools longer, and it becomes a recipe for soaring demand.

“These incoming foreign students need somewhere to live, and with the increased population growth, there will be pressure on the housing market in university towns,” said a recent report from the Real Estate Investment Network, which found that rents and house prices are higher nearer to universities and colleges, all other things being equal.

As an example, the report pointed to the university town of Kingston, Ontario, home to Queen’s University. Despite negligible population growth, it has a shockingly low apartment vacancy rate of just 0.6 percent.

Cities with the largest shortages of student beds

Even Charlottetown, P.E.I., is reporting a shortage of student accommodations, while in larger cities like Ottawa ― estimated to have one of the largest shortages of student housing ― students are reporting skyrocketing rents, a problem made worse for some by cutbacks to provincial student assistance.

In Canada, the supply of housing near post-secondary schools ― many of them in built-up urban areas ― isn’t responding to the influx like it has in other countries that have seen a flood of international students, such as the U.S. and U.K.

Canada is “10 to 15 years behind other countries” in developing off-campus student housing, a managing partner at a Toronto real estate investment trust told the authors of the REIN report.

In a report earlier this year, CIBC estimated that Canada is short about 300,000 housing units, largely because international students aren’t counted as “residents” in the data. And no one builds houses for a population that “isn’t there.”

Yet it is there, and it’s flooding the real estate market with new money. In British Columbia ― where the number of international students quadrupled in the past decade, according to numbers cited at Western Investor ― the typical international student spends $12,000 a year on housing.

What are international students studying in Canada?

So far, the problem continues to fly under the radar, and as long as that’s the case, students themselves are likely to find themselves bearing the brunt of the crisis ― and not only through excessive housing costs. In a tight housing market, many students may find themselves exploited.

Students in Kitchener-Waterloo are complaining about leases being inexplicably canceled at the last minute. In other cities, authorities are waking up to the reality of students living in hazardous, substandard rental units.

Eventually, policymakers will need to respond to this growing crisis. But first, they will have to realize it exists. Let’s hope that happens sooner rather than later.