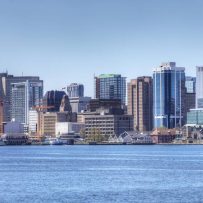 She wasn’t shocked when her landlord slipped a notice of rent increase under her door about four months ago. The cost of her two-bedroom apartment in north-end Halifax has risen several times over the past 11 years, but until this year, the changes had been incremental.

“I do understand that the cost of living does go up, but before it was always reasonable, say $25, $50 a year.”

“I just didn’t understand,” she said. “The old owner was able to manage it with smaller increases, and with this increase, when it came, it almost just seemed … like a money grab.”

In their letter of notice to Lane, the company said the increase was due to “increased operating costs.”

CBC asked Olympus by email for more detailed information about the reason for the rent increase but did not receive a response.

Lane said that with no major renovations to her unit or her building, the increase feels like “gouging,” and she said her circumstances underscore the need for rent control — a legislated cap on rent increases.

“The government definitely needs to step in,” said Lane. “It needs to show that it cares about its residents in this province.

Lane’s neighbour across the hall, who is also her son’s grandmother, shares the sentiment.

Arlene Perry has lived in the building for more than 20 years and was the superintendent under the former ownership — a job that earned her discounted rent. She said Olympus eliminated the role this summer, which meant she lost her discount and her rent rose from $560 to $800.

The building is a four-storey walk-up and Perry said it has few amenities. She said she’s made cosmetic improvements to her unit over the years, but there have been no major upgrades.

Perry and Lane’s calls are backed by advocacy groups like ACORN Canada, which launched a campaign for rent control in Nova Scotia this summer, and left-wing think-tank the Canadian Centre for Policy Alternatives.

Nova Scotia has had rent control before, but not since the early 1990s.

The provincial NDP proposed a rent control bill in 2018, but the sitting Liberal government has essentially rejected it by leaving it untouched on the floor of the legislature for two years.

The Residential Tenancies Act is the central piece of legislation in Nova Scotia regulating rental housing, and it falls under the portfolio of Internal Services Minister Patricia Arab. She declined an interview request.

Porter said the government would rather let market forces dictate rents because “competition is a good thing.”

But, he said, that doesn’t mean the province doesn’t recognize Halifax’s low rental vacancy rate, which dipped to one per cent last year, and dwindling supply of affordable housing.

Sometimes the province supplements rents to bridge the gap between what individuals can afford and a unit’s market price. Porter said the province works hard to maintain “a good relationship with landlords,” to help people find and keep suitable housing.

‘Not the magic elixir’

Many of those landlords are represented by the Investment Property Owners Association of Nova Scotia, led by executive director Kevin Russell.

For their part, Russell said, most landlords in Nova Scotia are not in favour of rent control.

He said rent inflation currently is a symptom of rising costs like insurance. He said insurance companies are also increasingly demanding capital upgrades to buildings to keep them insured.

Beyond the business case, Russell said he believes capping rents “is not the magic elixir to fix affordable housing issues.”

“Jurisdictions where rent control has been implemented result in developers exiting the purpose-built rental market. And when this happens, there’s a severe reduction in rental units that at a time drive up rents,” Russell said.

Ather Akbari, an economics professor at Saint Mary’s University, agreed with Russell that rent control can be counterproductive to its intended aim. He said it can even encourage a black market, where landlords follow the rules of rent control on paper but take extra money under the table.

“We cannot trick the market. Any policy that is adopted to help the poor segment of the society should also keep in mind the market forces, how market forces work,” Akbari said.

Lars Osberg, a Dalhousie University economic professor, said some of the potential pitfalls of rent control can be addressed in the details of legislation.

“It’s quite feasible to have a rent control on existing apartments, but have new apartments exempt from some controls … If you exempt new construction, it doesn’t impede the supply of housing at all,” Osberg said.

Earlier this summer, a policy and research analyst for Arab’s department compiled a report on rent control legislation across Canada, which shows how some provinces use exemptions as Osberg described.

In Ontario, rent control does not apply to new residences built after 2018; and in Manitoba, units are exempt if they already cost more than $1,545, and properties with three units or fewer are exempt.

B.C. and P.E.I also have rent control, but, according to Nova Scotia’s report, they don’t have any standard exemptions.

What both economists and Russell agreed on is that the long-term solution to rent inflation is to increase supply in the housing market.

“If you look around town, what you see is mostly cranes,” said Russell, who said he predicts Halifax’s rental vacancy will soon rise, as new construction is completed and more units hit the rental market.

In its 2019 rental market report on Halifax, the Canada Mortgage and Housing Corporation said there were more than 4,000 new rental units under construction — a record high.